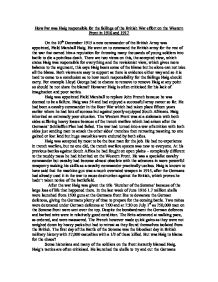 How Far was Haig responsible for the failings of the British War effort on the Western Front in 1916 and 1917 On the 10th December 1915 a new commander of the British Army was appointed, Field Marshall Haig. He went on to command the British army for the rest of the war that earned him a reputation for throwing many thousands of young soldiers into battle to die a pointless death. There are two views on this, the accepted view, which states Haig was responsible for everything and the revisionist view, which gives more balance to the argument, this says Haig bears some of the blame but he alone can not take all the blame. Both views are easy to support as there is evidence either way and so it is hard to come to a conclusion as to how much responsibility for the failings Haig should carry. For example Lloyd George had to chance to remove to remove Haig at any point so should he not share the blame? However Haig is often criticised for his lack of imagination and poor tactics. Haig was appointed Field Marshall to replace John French because he was deemed to be a failure. Haig was 54 and had enjoyed a successful army career so far. He had been a cavalry commander in the Boer War which had taken place fifteen years earlier where he had lots of success but against poorly equipped South Africans. Haig inherited an extremely poor situation. The Western Front was at a stalemate with both sides suffering heavy losses because of the trench warfare which had arisen after the Germans' Schlieffen Plan had failed. ...read more.

Haig was also given poor intelligence about the Germans, including the information the German army was on the verge of defeat, if Haig had known this information to be false he might not have gone for the massive attack he had planned as he hoped to wipe out the Germans. Despite the large number of failings at the Somme there were many positives to come out of the battle. Some of the failings could also have been blamed on the messengers which Haig had. They wouldn't have dared to tell the full truth because of Haig's rational character in fear of losing their jobs. The tank was used for the first time here. Haig got to test them out in the field and discover their real strengths and weaknesses. New tactics for defeating the Germans were developed. The British learnt to gather more intelligence first so the aeroplane started to be used more. Haig also realised that he must be more flexible in the field. The field officers that were considered to be inflexible were removed and were replaced by flexible commanders. But would these new tactics be used by Haig in other major battles? The next major battle for Haig was Passchendaele. This is what Haig had wanted for a long time, an attack in Flanders. The battle began at 03:50, in darkness as apposed to the Somme were he attacked in daylight, on the 31st July 1917 but since the 18th July, as usual, a heavy preliminary bombardment had been pounding the German defences, giving the Germans full awareness an attack was coming. ...read more.

Lloyd George took over as he said he would be more energetic in the war. This means that he would have had to have put pressure on Haig to be more vigorous in the war, and the only way to do this would be to attack. Haig would be forced to do as Lloyd George says in fear of his job. There are also other commanders which could be blamed, Haig's partner, General Sir William Robertson, did not do anything to stop Haig and also helped Haig with a lot of strategies so he should get some blame. General Joseph Joffre should also share some of the blame. He was commander of the whole of the Western Front, Haig was answerable to him so surely he should share some of the blame. Although Haig should be given some of the blame for his obvious lack of imagination and variety in his battle tactics, he should not be given full blame. There has been no alternatives suggested to Haig's plans which would have been guaranteed to work or to lose any less men. I think Haig's reputation came about because of the government. The people of Britain would have been very angry with the government because nearly everyone knew someone who died in the war so to keep in power the government must have needed to pass the blame to someone else, who happened to be Haig as he would be easiest to blame as he was the army commander. Overall I feel that Haig played a part in the failings of the Western Front but the role he played in them was exaggerated by the government in an attempt to shift the blame. ?? ?? ?? ?? ...read more.