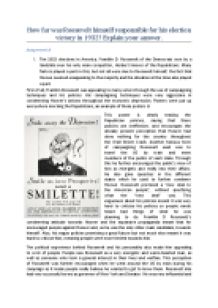 How far was Roosevelt himself responsible for his election victory in 1932?

﻿How far was Roosevelt himself responsible for his election victory in 1932? Explain your answer. ________________ Assignment A 1. The 1932 elections in America, Franklin D. Roosevelt of the Democrats won by a landslide over his only main competitor, Herbert Hoover of the Republicans. Many factors played a part in this, but not all were due to Roosevelt himself, the fact that Hoover seemed unappealing to the majority and the situation at the time also played a part. First of all, Franklin Roosevelt was appealing to many voters through the use of campaigning techniques and his policies. His campaigning techniques were very aggressive in condemning Hoover?s actions throughout the economic depression. Posters were put up everywhere mocking the Republicans, an example of these posters is: This poster is clearly teasing the Republican policies, saying that there policies are ineffective, and encourages the already present perception that Hoover had done nothing for the country throughout the Wall Street Crash. ...read more.

This reputation and experience made him seems a very good candidate for the country, where reform was thought to be needed. Roosevelt?s warm, caring personality and his interest in their lives made the public think he would try hard for their welfare and knew what they needed, and his experience meant people believed he had the ability to address their problems. However, the fact that Hoover was so unappealing to so many people also played a part in Franklin Roosevelt?s electoral success. Hoovers recent history as American president through the Wall Street Crash had given him a bad reputation throughout America. A famous banner carried in a demonstration of Iowa farmers said ?In Hoover we trusted and now we are busted?. A large proportion of the public believed he had done nothing to help them throughout their time of need in the Depression, and that he had got them in the mess they were in. ...read more.

Also, through this time of turmoil, many people were had a lot of self-pity and were afraid of the future, so Roosevelt?s warm, caring figure seemed very attractive unlike Hoover?s cold attitude. The desperation felt by many people at the time made them want a change from the current president, Hoover, and want the warm, caring figure of Roosevelt as their leader. Also, this desperation made Roosevelt?s policies seem more attractive, and caused turmoil which Hoover reacted badly against, damaging his profile. Overall, many factors played a part in Roosevelt?s electoral success. Roosevelt?s campaigning techniques, policies, personality and experience made him appealing to the government. However, Hoover?s recent history, policies and personality, and the economic and political situation at the time also played a key role in his electoral success. In conclusion, I think that all parts played a key role, but that Hoover?s actions beforehand and the situation made him very unpopular, so Roosevelt?s job was made significantly easier. ...read more.