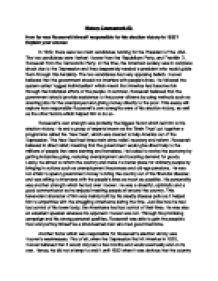 How far was Roosevelt himself responsible for his election victory in 1932? Explain your answer.

History Coursework #2: How far was Roosevelt himself responsible for his election victory in 1932? Explain your answer. In 1932, there were two main candidates running for the President of the USA. The two candidates were Herbert Hoover from the Republican Party, and Franklin D. Roosevelt from the Democratic Party. At the time, the American society was in complete shock due to the Depression and they desperately needed a president who would guide them through this hardship. The two candidates had very opposing beliefs. Hoover believed that the government should not interfere with people's lives. He followed the system called 'rugged individualism' which meant that America had become rich through the individual efforts of the people. In contrast, Roosevelt believed that the government should provide assistance to the poorer citizens by using methods such as creating jobs for the unemployed and giving money directly to the poor. This essay will explore how responsible Roosevelt's own strengths were of his election victory, as well as the other factors which helped him to do so. ...read more.

Another factor which was responsible for Roosevelt's election victory was Hoover's weaknesses. First of all, when the Depression first hit America in 1929, Hoover believed that it would only last a few months and would eventually end on its own. Hence, he did not attempt to end it until 1932 when it was obvious that the country would not return to prosperity by itself. He then started to take some action, although many people believed that it was too late. He began to make small loans to farmers and created a few new jobs for the unemployed in a road-building program. However, this was simply not enough as the country was already in too much of a mess. Another large reason why Hoover had lost so many votes during the election was due to the 'Bonus Marchers' of 1932. At the end of the First World War, the surviving veterans were promised a pension that would be paid to them in 1945. ...read more.

Therefore, Roosevelt was not just an alternative choice to Hoover, but a great leader who looked to put an end towards the Depression in a manner which contented many of the struggling Americans. In conclusion, Roosevelt himself had contributed greatly to his election victory with his auspicious campaign, vocal talents and personable qualities; however, he was not wholly responsible for the victory. One of the most important factors was the public hatred of Hoover and the fact that the majority of people had desperately wanted change. These people had disapproved of Hoover's way of handling the Depression and had wanted an alternative choice, and this gave Roosevelt a huge advantage. Another significant factor was that Roosevelt had managed to win the battle of ideas on how to tackle the Depression as the two candidates had completely different ideas about pulling America out of the Depression. Roosevelt had fabulous talent and experience as a politician, but there were more reasons to why he had won the presidential election in 1932 than just his own strengths. ...read more.