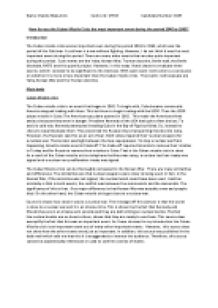 How far was the Cuban Missile Crisis the most important event during the period 1945 to 1965?

﻿Name: Valerie Makumire Centre Id: 17703 Candidate Number: 8157 How far was the Cuban Missile Crisis the most important event during the period 1945 to 1965? Introduction The Cuban missile crisis was an important even during the period 1945 to 1965, which was the period of the Cold war. A cold war is a war without fighting. However, I do not think it was the most important event during this period. There are many other events that are also quite important during this period. Such events are the Yalta, Korean War, Truman doctrine, Berlin wall, the Berlin blockade, NATO and the sputnik project. However, in this essay I have chosen to evaluate three events, which I consider to be significant to the Cold war. With each event I will come to a conclusion on whether it is more or less important than the Cuban missile crisis. The events I will evaluate are Yalta, Korean War and the Truman doctrine. Main body Cuban Missile crisis The Cuban missile crisis is an event that began in 1962 .To begin with, Cuba became communist. America stopped trading with them. This led them to begin trading with the USSR. Then the USSR places missile in Cuba. The American spy plane spotted in 1962. This made the Americans feels anxious because they were in danger. President Kennedy of the USA had quite a few choices. To avoid a cold war, Kennedy attempted invading Cuba in the Bay of Pigs but failed. So, instead he chose to naval blockade them. This prevented the Russian ships transporting missiles into Cuba. ...read more.

At Potsdam, the leaders had changed. Instead, at Potsdam there was Atlee, Truman and Stalin. In addition, Stalin was angry at Truman for not telling him about the atomic bomb. Furthermore, Atlee and Truman were anxious of Stalin because of the growth of communism. As you can see, there was a little bit of tension and few disagreements at Yalta. But in Potsdam the tensions increased rapidly mostly because of the many disagreements. However, I think these events are less important than the Cuban missile crisis because these events did not even get close to a nuclear war. The only thing that happened in these events is that the tensions were increased because of a few disagreements. However, from another perspective you could say that the agreements they made were very important because without them the Nazi?s could have rebuilt their military. But in my opinion, yes that is valid point but the Germans were too poor after the war to rebuild their army and they would have been behind on the nuclear arms race. Truman doctrine The Truman doctrine was the name of a policy which was created to fight off communism. America was becoming more and more aware of the growth of communism. This was worrying to them so, when the British told them they could not keep their soldiers in Greece; America took over with no hesitation. The congress of America said it was "America's job to stop communism growing any stronger." ...read more.