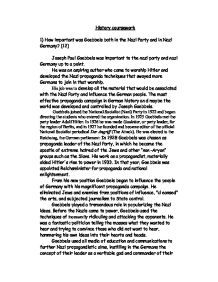 How important was Goebbels both in the Nazi Party and in Nazi Germany?

History coursework 1) How important was Goebbels both in the Nazi Party and in Nazi Germany? [12] Joseph Paul Goebbels was important to the nazi party and nazi Germany up to a point. He was an aspiring author who came to worship Hitler and developed the Nazi propaganda techniques that swayed more Germans to join in that worship. His job was to develop all the material that would be associated with the Nazi Party and influence the German people. The most effective propaganda campaign in German history and maybe the world was developed and controlled by Joseph Goebbels. Goebbels joined the National Socialist (Nazi) Party in 1922 and began directing the students who entered the organization. In 1925 Goebbels met the party leader Adolf Hitler. In 1926 he was made Gauleiter, or party leader, for the region of Berlin, and in 1927 he founded and became editor of the official National Socialist periodical Der Angriff (The Attack). He was elected to the Reichstag, the German parliament. In 1928 Goebbels was chosen as propaganda leader of the Nazi Party, in which he became the apostle of extreme hatred of the Jews and other "non-Aryan" groups such as the Slavs. ...read more.

He recruited the brightest, most intelligent young men he could find to work in his department. In the Nazi's industrial takeover of Germany, the propaganda machine was then set up into seven different sections, each in charge of the a department: Administrative and Organization, Propaganda, Radio, Press, Films, Theatre and Adult Education. Anyone who produced, distributed, broadcasted, published, or sold any form of cinema, media, press, or literature had to first join one of the departments and then follow all rules of the department head. That person was usually Joseph Goebbels. Naturally, no Jews, non-Aryans, or any of Hitler's adversaries were not allowed to join. Thus, without a license to practice their businesses, all artists, writers, publishers, producers, or directors could not work or do any business in their field. Also along with those quotas, came the prohibition of all Jewish newspapers, radio, and cinema. Children were indoctrinated at every turn, especially in such groups as the Hitler Youth and the League of German Girls. Spectacular rallies were staged to galvanize the German public into support of Hitler's agenda. During the first years of the Second World War, 1939 to 1942, Goebbels' job as Propaganda Minister was relatively easy. ...read more.

He wore the title of Big Liar (bestowed by Anglo-Saxon propaganda) and yet he never stopped battling for propaganda to be as accurate as possible. He preferred being cynical and brutal to being caught in a lie. He was always the first to announce disastrous events or difficult situations, without hiding anything. The result was a general belief between 1939 and 1942 that German communications not only were more concise, clearer and less cluttered, but were more truthful than Allied communications (American and neutral opinion) and, furthermore, that the Germans published all the news two or three days before the Allies. All this is so true that pinning the title of Big Liar on Goebbels must be considered quite a propaganda success. Goebbels also had a major role in the destruction of Germany by contributing to drawing a map that showed the path that lead Germany to it's doom. He helped ignite a world war that eventually ended with a bitter German defeat, and so the downfall of Germany. A war the consequences of which were far too bad for the either Goebbels or Hitler to imagine. A war that resulted in a very humiliating end of Germany, as the three Allied leaders discussed how it was to be divided between them in Yalta, and how it was to be disarmed, the Nazi party banned and it's leaders tried as war criminals. ...read more.