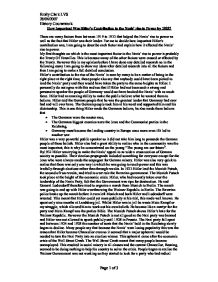 How Important Was Hitler's Contribution to the Nazis' rise to Power by 1933?

How Important Was Hitler's Contribution to the Nazis' rise to Power by 1933? There are many factors from between 1919 to 1933 that helped the Nazis' rise to power as well as the fact that Hitler was their leader. For me to decide how important Hitler's contribution was, I am going to describe each factor and explain how it affected the Nazis' rise to power. My first thoughts on which is the most important factor to the Nazis' rise to power is probably the Treaty Of Versailles. This is because many of the other factors were caused or affected by the Treaty. However this is my opinion before I have done any detailed research so in the following essay I am going to show my ideas after detailed research into all the factors and then I am going to make a full detailed conclusion. Hitler's contribution to the rise of the Nazis' is seen by many to be a matter of being in the right place at the right time, these people also say that anybody could have been picked to lead the Nazis' party and they would have taken the party to the same heights as Hitler. ...read more.

The result of this is that many peoples lives became misery, many people had to give up their homes. All of this along with the earlier economic crisis of 1919 to 1923 due to reparation payments from the Treaty Of Versailles left many people bitter towards the Government as they soon realised that the Government could no longer help Germany recover as they had promised after the First World War. Again this left them looking for a change, and many people looked to the extreme parties who offered radical solutions to many of Germany's problems. The Nazis' were an extreme right wing party that good ideas that people were attracted to. In 1919 the Weimar Republic signed the Treaty of Versailles. This stated that Germany was to be held guilty of causing the First World War and all the damage resulting from it. Hence, the German nation was expected to provide compensation. This also led to the economic crisis, because the compensation payments or reparations were extremely large and Germany could not afford them, and many other problems. The German people were very angry that their government had signed the treaty and in doing so taken the blame for something that they had not done. ...read more.

I personally think that Hitler was only a contributing factor to the Nazis' rise to power. Although he was a strong speaker and h made the Nazis well known I think that maybe the Nazi Party could have reached similar heights without him. They may not have done it so quickly but I do think that they would have done it. From what I said at the beginning of this essay: that the Treaty of Versailles was the most important factor, I have changed my mind. There are many reasons for this is that although the Treaty of Versailles affected the depression I do not think that they signing of the treaty was actually that important. I do however think that the things that individuals and other parties did was fairly important. This is because Von Papen and Hindenburg both together put Hitler into a position were he had control. The Communists and the socialist also misjudged the Nazis power and they both saw each other as their enemies rather than the Nazis. I do think though that if one factor was removed from the period of 1919 to 1933 the whole situation would have been different. In a final concluding sentence: All the factors mentioned all had a place in the rise of the Nazis but some were more so than others. ...read more.