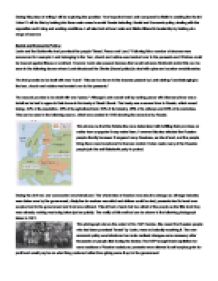 How important was Lenin compared to Stalin in creating the Soviet Union?

During this piece of writing I will be exploring the question: How important was Lenin compared to Stalin in creating the Soviet Union? I will do this by looking into three main areas in soviet Russia including: Social and Economic policy, dealing with the opposition and Living and working conditions. I will also look at how Lenin and Stalin differed in leadership by looking at a range of sources. Social and Economic Policy: Lenin and the Bolsheviks had promised the people "Bread, Peace and Land." Following this a number of decrees were announced for example: Land belonging to the Tsar, church and nobles was handed over to the peasants and Workers could be insured against illness or accident. However Lenin also passed decrees that would enhance Bolshevik control this can be seen in the following decree where Lenin introduced the Cheka (Secret police) to deal with spies and counter revolutionaries. The first promise to be dealt with was "Land." This can be shown in the decrees passed by Lenin stating "Land belonging to the tsar, church and nobles was handed over to the peasants." The second promise to be dealt with was "peace." Although Lenin meant well by making peace with Germany there was a forfeit as he had to agree to their terms in the treaty of Brest-Litovsk. The treaty was a severe blow to Russia, which meant losing: 34% of its population, 32% of its agricultural land, 54% of its industry, 26% of its railways and 89% of its coalmines. This can be seen in the following source, which was created in 1918 showing the areas lost by Russia. This shows me that the Bolsheviks were determined with fulfilling their promises no matter how unpopular it may make them. However this also affected the Russian people directly because: It angered many Russians, as lots of land, and the people living there were transferred to German control. ...read more.

This information can be backed up by the following sources: The source to the left shows a mock travel poster produced by Russian exiles in France in the late 1930's. The text says: "Visit the USSR's pyramids." This is basically a mock travel poster to deter those thinking of going to Russia. This poster could have an effect on the Russian economy because if there is no travel into Russia there won't be enough money circulating, and the Russian people will suffer as a result. Stalin also took things to the extreme by deleting/removing his opponents from photographs, as this allowed Stalin to create the impression that his enemies never existed. This can be shown in the source below: Although Stalin was to blame for the death of a vast number of people, in the USSR in the 1930's you would have found that the average citizen actually admired Stalin. If you asked them about the purges they were likely to reply that it had nothing to do with Stalin himself. The soviet people honestly believed in Stalin and this belief was built up by communist leaders, and by Stalin himself. This became known as the cult of personality. The history of the Soviet Union was rewritten so that Lenin and Stalin were the only real heroes of the revolution. This would have had an impact on the people because: Stalin seriously weakened the USSR by removing so many able individuals. Everyone who was spared knew that their lives depended on thinking just like Stalin did, therefore becoming a clone hence the cult of personality. Although Stalin and his style of government were popular, you have to remember that Stalin was still in power during the 1930's and with so many prosecutions how could you not "like" Stalin. Many people were in fear of their lives already, therefore they believed in the man running their country. ...read more.

Lateness or absences were punished by sacking, and this could often lead to the person losing their own home as well, this would affect the people because with no income, how would they afford to live? Final Conclusion to answer the question: How important was Lenin compared to Stalin in creating the Soviet Union? To conclude Lenin and Stalin did have similarities for example the use of the secret police and that they both ultimately wanted to "crush their opponents." However they both focused on different aspects of the Soviet Union. I can see this where Stalin focuses on industrialisation and where Lenin focuses on getting the country back on its feet. Overall I believe Stalin had the bigger hand in creating the USSR: Under Lenin war communism led to a huge famine, although Lenin tried to redeem himself with the NEP, sources show that some production was still lower than pre 1914. Although Stalin did not meet his targets he was steadily increasing production of electricity, coal, oil, pig iron and steel. As a result the USSR increased in production and created a foundation on which to build the next five year plans. Although Living and working conditions were better under Lenin, Stalin achieved more. Lenin engaged with the peoples own concerns as he knew he must "try to satisfy the demands of the peasants who are dissatisfied, discontented" unlike Stalin who was not easing off, all that was important to him was achieving his own aims, this can be shown when an old man states "We have nothing, absolutely nothing. They have taken everything away.' Under Stalin many soviet workers had improved their conditions by acquiring well paid jobs and earning bonuses by meeting targets, even though discipline was strict and punishments were severe Stalin made unemployment almost nonexistent and in 1940 the USSR had more doctors per head than Britain. In the population as a whole, the long term impact of living under Stalin with terror and distrust haunted the USSR for a generation; however his methods allowed the USSR to strive. ?? ?? ?? ?? ...read more.