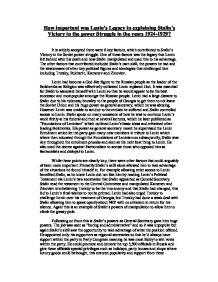 How important was Lenin(TM)s Legacy in explaining Stalin(TM)s Victory in the power Struggle in the years 1924-1929?

How important was Lenin's Legacy in explaining Stalin's Victory in the power Struggle in the years 1924-1929? It is widely accepted there were 6 key factors, which contributed to Stalin's Victory in the Soviet power struggle. One of these factors was the legacy that Lenin left behind after his death and how Stalin manipulated and used this to his advantage. The other factors that contributed included Stalin's own skill, the powers he had and the weaknesses of other key political figures and ideologies that challenged him including Trotsky, Bukharin, Kamenev and Zinoviev. Lenin had become a God-like figure to the Russian people as the leader of the Bolsheviks as Religion was effectively outlawed Lenin replaced God. It was essential for Stalin to associate himself with Lenin so that he would appear to be the best successor and most popular amongst the Russian people. Lenin had a large distaste to Stalin due to his rudeness, brutality to the people of Georgia to get them to not leave the Soviet Union and his huge power as general secretary, which he was abusing. ...read more.

The job was seen as "boring and administrative" and so it was unpopular but again Stalin's skill saw the opportunity to take advantage of what the position offered. He appointed only his supporters as regional secretaries so that he'd always have support within the party in Party Congress meaning he was most likely to win votes within the party. He could promote and demote the top 5,500 officials in Russia and give these officials special privileges such as holidays, party houses and shops where luxury goods could be bought, this ensured popularity and support from these officials. Stalin controlled the enrolment of new recruits to the party and giving them the impression he followed Lenin's legacy he easily impressed and manipulated them giving him more support. Finally he had access to key files and information, which allowed him to find dirt on opposition if needed be and to found out who was best suited for his supporting positions. The final key factors were all the weaknesses and mistakes of Stalin's main opposition and those who could of stopped or at least hindered his rise to power. ...read more.

He also failed to form an alliance with other leading Bolsheviks against Stalin which allowed him to gain power with a lot more ease, Lenin would of wanted a joint government but Trotsky's arrogance and the ignorance of Kamenev and Zinoviev prevented this. The final factor that helped Stalin rise was the weaknesses of Kamenev and Zinoviev. They did not support Trotsky when they could of easily removed Stalin's power and because of this Trotsky was kicked out of the party leaving the pair of them powerless to then do anything against Stalin. Stalin used his skill to turn on them and remove all their powers through the support of his Congress full of supporters. In summary all these factors contributed in differing levels to Stalin's Victory, with Stalin's Skill and powers leading, followed by his manipulation of Lenin's Legacy and then the mistakes of his opponents. In response to the question, Lenin's Legacy was almost essential to Stalin's rise to power as it gave him a huge opportunity to use his skill to manipulate new recruits and existing members into believing he was the next best thing to Lenin, who was hailed as almost God. ...read more.