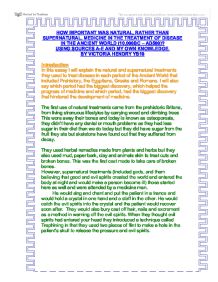 How important was natural, rather than supernatural, medicine in the treatment of disease in the Ancient World (10,000BC AD500)?

HOW IMPORTANT WAS NATURAL, RATHER THAN SUPERNATURAL, MEDICINE IN THE TREATMENT OF DISEASE IN THE ANCIENT WORLD (10,000BC - AD500)? USING SOURCES A-E AND MY OWN KNOWLEDGE. BY VICTORIA HENDRY YB10 Introduction In this essay I will explain the natural and supernatural treatments they used to treat disease in each period of the Ancient World that included Prehistory, the Egyptians, Greeks and Romans. I will also say which period had the biggest discovery, which helped the progress of medicine and which period, had the biggest discovery that hindered the development of medicine. The first use of natural treatments came from the prehistoric Britons, from living strenuous lifestyles by carrying wood and climbing trees This wore away their bones and today is known as osteoporosis, they didn't have any dental or mouth problems as they had less sugar in their diet than we do today but they did have sugar from the fruit they ate but skeletons have found out that they suffered from decay. They used herbal remedies made from plants and herbs but they also used mud, paper bark, clay and animals skin to treat cuts and broken bones. ...read more.

This was mainly based on natural and supernatural treatments because this process used salt, oil and chemicals to preserve the body when they believed they lived again in the afterlife. The other supernatural treatment they couldn't use was learn more about the body because they weren't able to dissect the organ and learned more about its function, as they thought it would be against the gods and they then wouldn't be able to live again in the afterlife. The third use of natural treatments came from the Ancient Greeks, as they found out that an illness could come naturally and one massive Greek philosopher Hippocrates developed his theory called The Theory of the Four Humours. This was an idea that was based on the seasons, the four elements, (air, fire, water and Earth) and when there was an imbalance or too much of one of the humours that included - blood, yellow bile, black bile and phlegm, the person would become ill. They also used other treatments, which included bleeding which would let out the excess blood, purging the body that would encourage the patient to vomit and would get rid of the excess black and yellow bile. ...read more.

He gained experience as he worked as a surgeon in Gladiator school and as a doctor to the Roman Emperor, he was able to dissect organs and he also dissected a pig to show doctors how nerves work by cutting the nerve in the throat to stop the pig from squealing. He discovered the brain controlled speech and the body and his medical ideas provided a framework for doctors for 1,500 years after he died. Conclusion From all this evidence the biggest discovery in medicine from the Ancient World that made the biggest progress was Galen realising that the brain and nerves controlled organs and the body. Also the Romans hygiene and public health solutions are still used today and helps prevent illness and horrible diseases. The discovery from the Ancient World that had the biggest regress was Hippocrates' many developments in the Greek Period as it stopped medicine from progressing for 2,000 years and this meant doctors didn't discover new ideas and develop his theories. This was a little bit of progress because his ideas were written in 60 books and provided as a support for doctors for 1,500 years. ...read more.