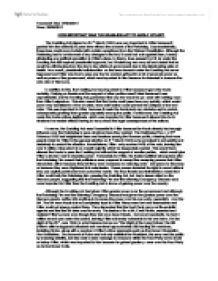 How important was the Enabling Act to Adolf Hitler?

HOW IMPORTANT WAS THE ENABLING ACT TO ADOLF HITLER? The Enabling Act (signed on 24th March 1933) was very important to Hitler because it granted him the authority to pass laws without the consent of the Reichstag. Unprecedentedly, these laws could even deviate (with certain exceptions) from the Weimar Constitution. Although the Reichstag had to be informed of any changes in the law, it could not vote against them, hereby eliminating any political opposition to Hitler's plans. In theory, laws passed by Hitler under the Enabling Act still required presidential approval, but Hindenburg was very old and stated that he would be withdrawing from the day to day affairs of government due to his deteriorating state of health. As a result, presidential collaboration on the laws decreed under the Enabling Act never happened and Hitler was free to pass any law he wanted, giving him a lot of personal power as well as power of the government, which was important to him because he intended to become the sole ruler of Germany. ...read more.

Nevertheless, Hitler only received 44% of the vote, leaving him over 2 million votes short of an overall majority which he desperately wanted. This would have allowed the Nazis to pass the Enabling Act without the support of smaller parties, which would give Hitler a shorter road to absolute power. Fortunately for Hitler, the heated political atmosphere after the Reichstag Fire meant that politicians were prepared to accept the sweeping powers that Hitler demanded, either because they felt they were necessary in restoring order and peace to Germany or because they were frightened into submission. These powers included the right to arrest without trial, use capital punishment and control the media. The Nazi threats and intimidation meant that Hitler could bully the Reichstag into passing the Enabling Act, but had a lesser effect on the German people, suggesting that the Reichstag Fire and the following Emergency Decrees were more important to Hitler than the Enabling Act in terms of gaining power over the country. Although the Enabling Act had given Hitler greater power over the government and although the Reichstag Fire and the following Emergency Decrees had given him greater power over the German people, neither did anything to increase his power over his own party, especially over the SA. ...read more.

In conclusion, the Enabling Act was not essential to Hitler but it provided him with an easier and faster route to absolute power than relying on the support or submission of smaller parties. An even faster route to power for Hitler would have been to gain an overall majority in the 1933 general election, after which he would have been able to pass any law without the need for an Enabling Act. It was more important to Hitler that the Enabling Act gave him symbolic power rather than actual power because he was still second to Hindenburg in the eyes of the public. He could pass whatever laws he wanted anyway, but he could also be sacked by the President, something which he keenly sought to change. The Enabling Act and The Night of the Long Knives eclipse the significant but modest consolidation of power by Hitler arousing out of the Reichstag Fire, which remains controversial. Finally, when President Hindenburg died of natural causes on 19th August 1934, Hitler declared himself Fuhrer: jointly President, Chancellor and Head of the Armed Forces. ?? ?? ?? ?? Homework Due: 27/09/2011 Done: 26/09/2011 ...read more.