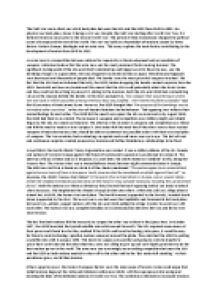 How important was the nuclear arms race in the development of tensions during the Cold War 1945-1962?

﻿The Cold War was a silent war which took place between the USA and the USSR from 1945 to 1991. No physical war took place, hence it being a cold war. Despite the Cold War starting after World War Two, it is believed tensions arose prior to the Second World War. This period of time dramatically changed the political scene of Europe and the rest of the World. The war was built on a foundation of tensions caused by three factors: Eastern Europe, ideologies and an arms race. This essay explores the main factors contributing to the development of tension from 1945 to 1962. An arms race is a competition between nations for superiority in the development and accumulation of weapons. Historians believe that the arms race was the most prominent factor causing tensions. The significant turning point of the USA and USSR?s relationship, and trigger event to the arms race, was the bombing of Japan. In August 1945, the USA dropped two atomic bombs on Japan. Hiroshima and Nagasaki were destroyed and thousands of people died. The bombs were the most powerful weapons invented. The fact that the USA had not informed their ally, the USSR, before dropping the bombs created suspicion from the USSR. Russia did not have any bombs and this meant that the USA could potentially attack the Soviet Union and they could not do a thing to prevent it. ...read more.

Stalin left his troops occupying Eastern European countries. The USA disliked this as they detested communism, but now that ?the war had left them holding lots of land in Europe- much too much land? (Clement Atlee, Britain?s Prime Minister), it would make it difficult for the USA to contain communism with the potential of communist expansion through Europe. The conferences sparked the tensions between the two, however, in June 1948, tensions rapidly increased with the Berlin Blockade. The Soviets cut off road and rail routes to West Berlin in hope that the allies would be forced to leave Berlin and that the capitalist toxin in Eastern Europe would be removed. The US saw this as the USSR?s attempt to expand European communism and decrease Europe?s confidence in America. The USA counteracted this act by supplying necessities via airlift and moving their nuclear bomber force to England as a threat to Russia. Truman justified his actions in 1949 by saying ?We would act when freedom was threatened?, and therefore undermined the USSR?s actions as portraying it as a form of entrapment. The USSR and the USA both claimed their parts of Germany through dividing it. Germany and Berlin were both divided between the nations. Both the countries wanted to claim their land and used it to show how they were better. ...read more.

The Soviet Foreign Minister, Gromyko saw the USA?s attempts as ?an unrestrained anti-Cuban propaganda campaign?. Once again, the two nations lacked the capability of seeing eye to eye and had miscommunication faults. It could be argued that the contrasting ideologies were the underlying cause of tension and kept tensions alive and healthy throughout the 17 year period. The change in presidents and leaders changed the level of tensions. As opposed to Stalin, Khrushchev wanted to improve relations and opposed to Truman and Roosevelt, Kennedy was fairly passive (e.g. Berlin Wall). Without the initial friction created from the differences in ideologies, there would not have been an arms race or competition for control over Eastern Europe. Both countries aimed for peace, but their methods for peace were constantly viewed as threats due to the hatred of the opposing ideologies. Khrushchev believed ?the main thing is to argue without resort to arms? and Kennedy believed ?a wall is a hell of a lot better than a war?, showing that neither wanted to end up going to war and so both nations were in an arms race solely to prove their ideologies? worth. The knowledge that the opposing nation wanted to expand their ideologies blinded the other and created them ignorant, hiding their ignorance through control over Europe and accumulation of nuclear arms. Overall, the contrast in ideologies was the factor which, throughout the cold war, created the foundation of and was the heart of tensions between the USA and USSR. ...read more.