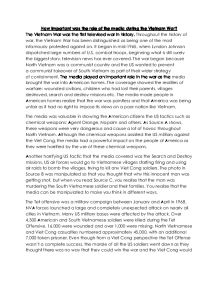 How important was the role of the media during the Vietnam War?

How important was the role of the media during the Vietnam War? The Vietnam War was the first televised war in history. Throughout the history of war, the Vietnam War has been distinguished as being one of the most infamously protested against on. It began in mid-1965, when Lyndon Johnson dispatched large numbers of U.S. combat troops, beginning what is still surely the biggest story, television news has ever covered. The war began because North Vietnam was a communist country and the US wanted to prevent a communist takeover of South Vietnam as part of their wider strategy of containment. The media played an important role in the war as the media brought the war into American homes. The coverage showed the realities of warfare: wounded civilians, children who had lost their parents, villages destroyed, search and destroy missions etc. ...read more.

You realize that the media can be manipulated to make you think in different ways. The Tet offensive was a military campaign between January and April in 1968. NVA forces launched a large and completely unexpected attack on nearly all cities in Vietnam. Many US military bases were affected by the attack. Over 4,300 American and South Vietnamese soldiers were killed during the Tet Offensive. 16,000 were wounded and over 1,000 were missing. North Vietnamese and Viet Cong casualties numbered approximately 45,000, with an additional 7,000 taken prisoner. Even though from a Viet Cong perspective the Tet Offense wasn't a complete success, the morale of all the US soldiers went down as they thought there was no way that they could win the war and the Viet Cong would kill them eventually. The media conveyed the campaign very effectively. ...read more.

The media was linked in these things because of the protest songs. The protest song raised a great amount of awareness towards the Vietnam War. The media affected the war greatly as it was the first war to show the realities of warfare to the people at home, who are in their comfort and don't realize how much people sacrifice in the war. The media had an important role in the war as it changed the war itself. The media showed the realities of war such as chemical weapons, Search and destroy mission, air raids, surprise attacks (Tet offensive) etc. The media caused people in America to make the US government realize that there was no point for America to be part of the war in the first place as Vietnam was a country far away and that they had no right to impose their view towards a poor nation like Vietnam. The media had an important role in the war as it affected the war greatly. ?? ?? ?? ?? ...read more.