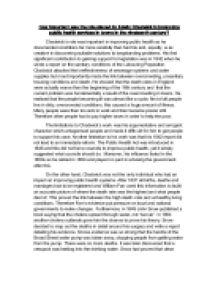 How important was the role played by Edwin Chadwick in improving public health services in towns in the nineteenth century?

How important was the role played by Edwin Chadwick in improving public health services in towns in the nineteenth century? Chadwick's role was important in improving public health as he documented conditions far more carefully than had his and, equally, was creative in discovering suitable solutions to longstanding problems. His first significant contribution to gaining support for legislation was in 1842 when he wrote a report on the sanitary conditions of the Labouring Population. Chadwick attacked the ineffectiveness of sewerage systems and water supplies but most importantly made the link between overcrowding, unsanitary housing conditions and death. He showed that the death rates in England were actually worse than the beginning of the 19th century and that the current problem was fundamentally a result of the overcrowding in towns. ...read more.

On the other hand, Chadwick was not the only individual who had an impact on improving public health systems. After 1837 all births, deaths and marriages had to be registered and William Farr used this information to build an accurate picture of where the death rate was the highest and what people died of. This proved the link between the high death-rate and unhealthy living conditions. Therefore Farr's evidence put pressure on local and national governments to make changes. Furthermore, in 1849 John Snow published a book saying that the cholera spread through water, not 'bad air'. In 1854 another cholera outbreak gave him the chance to prove his theory. Snow decided to map out the deaths in detail around his surgery and write a report detailing his evidence. ...read more.

As cholera spread across Europe in 1847 fear grew in Britain of many thousands of death were to come. Therefore the government finally followed Chadwick's recommendations and passed the Public Health Act in the hope this would reduce the impact of cholera. However, the 1848 Act was not compulsory. Only 103 towns set up local Boards of Health. Many more did not, and the National Board of Health, set up to oversee reforms, was abolished after only six years in 1854. I believe that Chadwick's role in improving public health services in towns in the nineteenth century was sufficiently important as without his report on the Sanitary Conditions of the Labouring Population, the public health act in 1848 may not have been set up. Although this was an important factor, it was not the only influence in public health therefore his role was not vital yet it did help the process of improving the public health standard. ...read more.