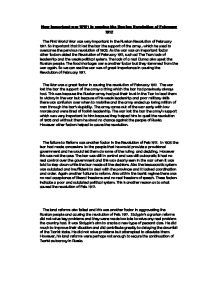 Also the beauacratic system was outdated and insufficient to deal with the provinces and it lacked coordination and order. Again another failure to reform. Also within the tsarist regime there was no real acceptance of liberal freedoms and no real freedom of speech. These factors indicate a poor and outdated political system. This is another reason as to what caused the revolution of Feb. 1917. The land reforms also failed and this was another factor in aggravating the Russian people and causing the revolution of Feb. 1917. Stolypin's agrarian reforms did not solve key problems and they were made too late to solve any real problem the country had. It was Stolypin's aim to create a new type of peasant class. He did much to improve their situation and did contribute greatly to delaying the downfall of the Tsarist state. He did not solve problems but attempted to alleviate them. However, his land reforms were perhaps not enough to secure the continuation of Tsarist autocracy in Russia. ...read more.

The final push that caused the revolution was the food and bread shortages in Petrograd. The First World War had a disastrous impact on the Russian economy. Food was in short supply and this led to rising prices. By January 1917 the price of commodities in Petrograd had increased six-fold. In an attempt to increase their wages, industrial workers went on strike and in Petrograd people took to the street demanding food. On 11th February, 1917, a large crowd marched through the streets of Petrograd breaking shop windows and shouting anti-war slogans. The food shortages were the toppling factor but the war caused the food shortages! In conclusion it is evident that the war was not the main factor but the toppling factor it lead to other things such as loss of army support and food shortages which made the people of Russia rebel. The war itself could possibly have been recovered from with a good government but the tsar and his foolish antics meant that the country didn't feel stable with him as leader so he abdicated in 1917. p ...read more.