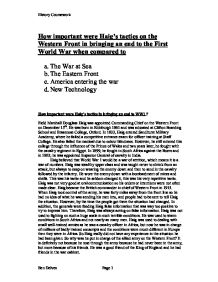 How important were Haig's tactics in bringing an end to WW1?

How important were Haig's tactics on the Western Front in bringing an end to the First World War when compared to a. The War at Sea b. The Eastern Front c. America entering the war d. New Technology How important were Haig's tactics in bringing an end to WW1? Field Marshall Douglass Haig was appointed Commanding Chief on the Western Front on December 15th. He was born in Edinburgh 1861 and was educated at Clifton Boarding School and Brasenose College, Oxford. In 1833, Haig entered Sandhurst Military Academy, where he failed a competitive entrance exam for officer training at Staff College. He also failed the medical due to colour blindness. However, he still entered this college through the influence of the Prince of Wales and two years later, he fought with the cavalry regiment in Egypt. In 1899, he fought in South Africa against the Boers and in 1903; he was appointed Inspector General of cavalry in India. Haig believed that World War 1 would be a war of attrition, which means it is a war of numbers. Haig was wealthy upper class and was taught never to shrink from an attack, but always to keep on wearing the enemy down and then to send in the cavalry followed by the infantry. He wore the enemy down with a bombardment of mines and shells. This was his tactic and he seldom changed it, this was his very repetitive tactic. Haig was not very good at oral communication so his orders or intentions were not often made clear. Haig became the British commander in chief of Western Front in 1915. When Haig took control of the army, he was forty miles away from the front line so he had no idea of what he was sending his men into, and people had to be sent to tell Haig the situation. However, by the time the people got there the situation had changed. ...read more.

Allied supremacy on the North Sea remained unchallenged for the duration of the war. Losses at the battle of Jutland. Britain Germany Battleships 0 1 Battle cruisers 3 1 Cruisers 3 4 Destroyers 8 5 Men 6077 2551 After the battle of Jutland no more battles of real significance occurred. This is important enough to be considered relevant to the outcome of the war as it meant that the German Navy did little to help its troops on the front. British dominance of the sea meant that for the rest of the war troops could be transferred across the Channel to France, which resulted in Germany,'s losing of the war. The battles that occurred were really irrelevant, as Germany never wanted to fight at sea, as they stood little chance in succeeding in any of them. Battles at sea were not the important factors, the important factors to both sides was the threat of war at sea. In 1917, the Germans again resorted to unrestricted submarine warfare, convinced that this method was the only one that would defeat Great Britain. The plan not only failed to force the capitulation of Great Britain, but also caused the United States to declare war against Germany. The attacks of German submarines on British convoys in the Atlantic and in the North Sea caused much loss of shipping. As a result, in April 1918, the British attempted to block the German submarine bases at Ostende and Zebrugge in Belgium; they succeeded in blocking Zebrugge and partially succeeded in Ostende. Therefore, the British Grand Fleet had created a blockade of German ports. This cut off the German supplies coming in from other countries. If it was not for this cut then the Germans would have had plenty of resources and Haig would not have been able to wear the Germans down so Haig's tactics would not have been so effective. ...read more.

However, it is fair to say that the Americans did speed up the end of the war, but they did not help the Allies cause considerably. The resources that the Americans brought helped on the Western Front. They helped breakthrough the Hindenburg line and that was the event that caused defeat for the Central Powers. It is quite probable that the Central Powers would have been defeated anyway but the American resources did speed it all up. Overall, I would say that Haig's tactics were the most important factors in bringing the war to an end. His tactics drained the German resources the most and if it had not been for them then the Allies would not have achieved the Hindenburg line breakthrough and the blockade would not have worked as well. The blockade would have been pointless without Haig's tactics because the Germans would still have had enough resources. In addition, he was the only one to have faith in the new technology and if it had not been for him then no one would have used them. He was the one who used the heavy artillery first and they brought about many breakthroughs. These vital breakthroughs would not have occurred if it would not have been for him and his tactics. His tactics on the Western Front used up the German resources so they were not as well equipped for fighting Russian on the Eastern Front. If they had had all the resources that they needed for fighting Russia then they would have been defeated for sure and quickly allowing the Germans to got back troops on to the Western Front again. The amount of resources he made the Germans use up led to a state of civil war in Germany and eventually led to surrender. Therefore, I believe that Haig's tactics were the most important in bringing and to the war when compared to The War at Sea, the Eastern Front, America entering the war and new Technology. History Coursework Ben Delves Page 1 ...read more.