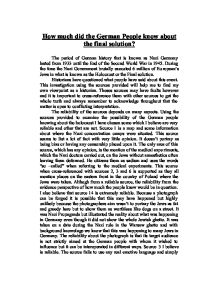 How much did the German People know about the final solution?

How much did the German People know about the final solution? The period of German history that is known as Nazi Germany lasted from 1933 until the End of the Second World War in 1945. During the time the Nazi Government brutally executed 6 million of European's Jews in what is known as the Holocaust or the Final solution. Historians have questioned what people have said about this event. This investigation using the sources provided will help me to find my own viewpoint as a historian. Theses sources may have faults however and it is important to cross-reference them with other sources to get the whole truth and always remember to acknowledge throughout that the matter is open to conflicting interpretation. The reliability of the sources depends on many aspects. Using the sources provided to examine the possibility of the German people knowing about the holocaust I have chosen some which I believe are very reliable and other that are not. Source 1 is a map and some information about where the Nazi concentration camps were situated. This source seams to list a lot of fact with very little opinion. It doesn't portray as being bias or having any censorship placed upon it. The only area of this source, which has any opinion, is the mention of the medical experiments, which the Nazi doctors carried out, on the Jews without anaesthetics often leaving them deformed. He citizens them as sadism and uses the words "so -called" when referring to the medical experiments. This source when cross-referenced with sources 2, 3 and 6 is supported as they all mention places on the eastern front in the country of Poland where the Jews were taken. Althogh from a reliable source, the reliability from the evidence perspective of how much the people knew would be in question. I also believe that source 14 is extremely reliable. ...read more.

This is backed up by source 1 and 2 that both have evidence to prove that the people may have known by this way. The people could also have heard the rumours that circulated. By cross-referencing Source 2, 3, 4, 5, 6, 9 and 10 we know that there was gossip, whispers and rumours about the fate of the Jews that did circulate the nation. People could easily have heard these rumours and they were most likely the most probable cause of people knowing. Source 2 also mentions the resettlement plans that the Nazis published for the Jews. Tens of Thousands of people were being moved around Europe, surely someone would have questioned why this was happening. This point was backed up several times in different sources and I believe it to be very valuable when looking at the conclusion. People may also have questioned what was happening when they seen the crematoria at the concentration camps. Source 3 tells about an American observer who witnessed this at Dachau. He said that when it was turned on the electricity in the houses went down and ash fell and settled on the front lawns. As people would have been living in these houses surely they could have guessed what was happening at the concentration camp. This source could also be crossed referenced with Source 4. "One heard stories that it would be impossible not to know what was happening, that the greasy smoke and unmistakeable odour of burning bodies could be detected for miles." This source also quotes an American who backed up the point that crematoria's had been used and that there was features from these noticeable to the German people from which they could have found out about the Nazi Final solution. Source 4 also makes a point that the people in the villages signed petitions to have the camps moved elsewhere. Undeniably these people must have known what was happening and by inferring about how they could have known and looking at how they could have reacted to this truth, we begin to uncover that whole villages knew what was going on. ...read more.

By inferring to general knowledge we know that not all the Nazis were guiltless animals but obviously some would have taken sympathy for the Jews such as Oscar Schindler did in the film. I do not believe that the Nazis or the German population felt this way about the Jews, but believe that indoctrination was a key role to the Nazi extermination camps. Daniel Goldhagen, a Jew born from a survivor of the holocaust also presented a view about how the German nation as a whole being so controversial and contentious , wanting to see the execution of the Jews. The Goldhagen thesis is based on the claim that the entire nations of Germans were mass murderers and that they passively supported I have reached only one conclusion from this study, that most of the German people knew about the final solution in some form. This could take up the form of hearing gossip, reading propaganda leaflets or actually seeing the smoke and ashes in front of them. I think the Germans would have been so scared and guilty about what was happening in their own back yards it was like a shock that they buried deep within their own individual minds and tried to forget much like medical disorders many people suffer. The evidence was there and 99% of the population MUST have seen something. There would have been people in the population who wouldn't have accepted what was happening but many of them also like the Jews haven't survived due to the strict grip that the Nazis held on the population. Goldhagen was right about one thing, the Germans knew, but his theory about their passive support is beyond any sane human's comprehension. To think that the German people became so evolved with the propaganda fed to them is an important question we must ask ourselves. Are the humanitarian principals of the western world, which each one of us holds only a myth? This would be important in understanding how each of us thinks. The answer however to this question would not be one that I would feel secure in knowing. ...read more.