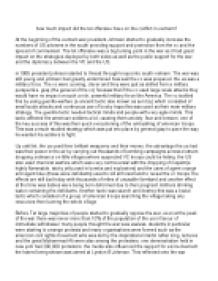 How much impact did the Tet offensive have on conflict in Vietnam?

﻿how much impact did the tet offensive have on the conflict in vietnam? At the beginning of the vietnam war president Johnson started to gradually increase the numbers of US advisers in the south providing support and protection from the vc and the spread of communism. The tet offensive was a big turning point in the war as it had great impact on the strategies deployed by both sides as well as the public support for the war and the diplomacy between the VC and the US. in 1965 president johnson started to thread through troops into south vietnam. The war was still young and johnson had greatly undermined how well the vc was prepared. the us was a military force. The vc were cunning, clever and they were just as skilled from a military perspective. giap (the general of the vc) foresaw that if the vc used large scale attacks they would have no impact on such a rich, powerful military force like America. The vc tackled this by using guerilla warfare (a ancient tactic also known as sun tzu) which consisted of small scale attacks and continuous use of booby traps this was used as their main military strategy. The guerilla tactic needed tactical minds and people with very agile minds. This tactic affected the american soldiers a lot, causing them anxiety, fear and tension. ...read more.

this would be the biggest and different style of attack to date from the vc. Giap needed more time to plan this but realistically he had minimal time, giap managed to put in 8 months of planning. the vc troops were commanded to keep a low profile while the plan was put into place. giap used his network of spies to feed him with the latest movements and details of the US to provide him and his troop the upper hand. The course of the planning was at its final stages, vc troops were still very quiet and had to move almost stealth like to get into position, giap continued to be one step ahead as he and his troops were going to have a ceasefire, the vc now knew they would definitely catch the US troops off guard the many had thought it was a sign that america was winning the war and the war soon to be over, but they were very wrong. the tet offensive was going to make a big impact and change many peoples perspectives about the war. the 30th of january 1968 marked an important event in the vietnamese calendar, little did the americans know the tet would start. Tet had changed the vc?s strategies causing them to use large scale attacks on hundreds of towns across the south including the broadcast tower and the US embassy. ...read more.

was for america to back down and give the vc a communist vietnam but america was not prepared to do that and responded with brutal tactics. After tet there was a big change in diplomacy with 25% of americans wanting to finish the war this was an increase of 15% compared to before tet. president Johnson realised the impact of tet so he decided to turn down westmoreland's request for more troops. johnson decided not to stand for election meaning the much favoured richard nixon would be elected. Nixon openly opposed the war and had promised to bring an end to the war in vietnam, he started off with reducing the bombing of the north and in 1973 he and henry kissinger did just that when the paris peace talks took place after negotiations broke down in 1968 due to the tet offensive. in conclusion the tet played a big part in vietnam. it was the main turning point in the war. from vietnam's perspective it was a psychological success, it made more americans oppose the war and it also made america think about their tactics such as the search and destroy and the use of chemical warfare. the tet made americans use educated attacks which were a lot more effective and from a americans view it was a military success for all the wrong reasons. the outcome of the tet showed its significance on the fighting and the the spirit of giap?s men ...read more.