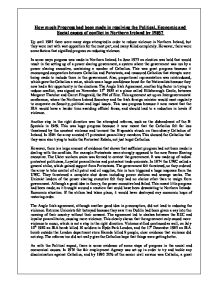 How much Progress had been made in resolving the Political, Economic and Social causes of conflict in Northern Ireland by 1985?

How much Progress had been made in resolving the Political, Economic and Social causes of conflict in Northern Ireland by 1985? Up until 1985 there were many steps attempted in order to reduce violence in Northern Ireland, but they were met with vast opposition for the most part, and many failed completely. However, there were some factors that signified progress on reducing violence. In some ways progress was made in Northern Ireland. 1n June 1973 an election was held that would result in the setting up of a power sharing government, a system where the government was run by a power sharing executive, containing a number of Catholics. This was great progress because it encouraged cooperation between Catholics and Protestants, and reassured Catholics that attempts were being made to include them in the government. Also, proportional representation was reintroduced, which gave the Catholics a voice, which was a huge confidence boost for the Nationalists because they now had a fair opportunity in the elections. The Anglo Irish Agreement, another big factor in trying to reduce conflict, was signed on November 15th 1985 at a place called Hillsborough Castle, between Margaret Thatcher and Garret Fitzgerald, the PM of Eire. ...read more.

If the strikes had taken place, it would have destroyed any economic hope of restoring order. The Anglo Irish agreement, although another good idea in presumption, did not lead to reducing the violence. Extreme Unionists felt betrayed because they saw it as Dublin had been given a say into the running of their country without their consent. The agreement led to clashes between the RUC and loyalist paramilitaries, causing more violence. This clearly shows that the agreement only caused more violence to occur, which is not a step in the right direction. Violence stilled continued as well, on July 10th 1982 an IRA bomb killed 10 soldiers in Hyde Park London, and the 17th December 1983 an IRA bomb outside the London department store Harrods killed 9 people, clear evidence that violence did not stop. The reforms too did not really give the Catholics hope that things were getting better. As with the Political aspect, there is some evidence of some steps of progress in the social and economical causes. In 1976 the fair employment Agency was set up in order to try and tackle any discrimination against Catholics, and by 1990 20% of the senior civil service was Catholic, a great improvement. ...read more.

Where according to the 1991 census over half the population still lived in segregated areas, and there were still slums and squalor on a large scale and houses. There was still unemployment, and rising as well. In 1982 unemployment was at 15%, and had risen to 21% in 1985. In 1981, at Whiterock ward in Northern Ireland unemployment was up to a staggering 56%, over half the local population. A report in 1982 investigating discrimination in Northern Ireland revealed continuing discrimination even after what the Fair employment agency had done to create a fairer work place. Overall, very little (but still a small amount) of progress was made in the Social, Economic and Political issues surrounding Violence up until 1985. Catholics still felt left out, discriminated against and had no hope of having a say. Protestants were fearful that they might have a United Ireland imposed on them. There were also many Paramilitaries creating trouble, including the provisional IRA, and extremist parties such as Sinn Fein had more support than the more moderate and peaceful ones. Council Housing and Job discrimination was an on going problem, segregation was a large issue in housing estates, and there was still unemployment, poverty and discrimination. ...read more.