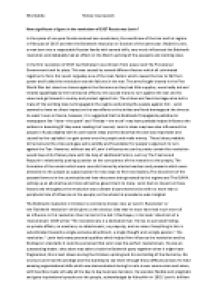 How significant a figure in the revolution of 1917 Russia was Lenin?

﻿Ellis Keddie History Coursework How significant a figure in the revolution of 1917 Russia was Lenin? In the space of one year Russia received two revolutions; the overthrow of the tsar and his regime in February of 1917 and then the Bolshevik revolution in October of the same year. Vladimir Lenin, a man born into a respectable Russian family with several skills, very much influenced the Bolshevik revolution and debatably had an effect on the March uprising of the peasants and working class. In the first revolution of 1917 tsar Nicholas II was thrown from power and The Provisional Government took its place. This was caused by several different factors which all culminated together to form this result. Arguably one of the main factors which caused the tsar to fall from power and fuelled the revolution was the failures in the war. The army fought bravely in the First World War but stood no chance against the Germans as they had little supplies, were badly led and treated appallingly by their aristocrat officers; this caused many to turn against the tsar and his views and go forward in mutiny and protest against him. The strikes and food shortages also led to many of the working class turning against the regime and joining the people against him. Lenin seemed to have no direct impact on the war efforts or the strikes and food shortages at the time as he wasn?t even in Russia, however, it is suggested that his Bolshevik Propaganda published in newspapers like ...read more.

It is most probable that the soldiers heard about these concepts and they may have contributed to them turning against the war and the government who had sent them there and made them begin to support the Bolsheviks. Also his development, along with Trotsky, of the idea that the proletariat, the working people, could carry through a socialist revolution without going through the so called ?bourgeois-democratic class? (the middle class) as it was too weak. The progression of this idea led to Bolshevik opposition of the Provisional Government, which many of the people liked as they were against the new government?s policies. This also led to Lenin writing up one of his most important piece of propaganda: The April Theses, and was a big contributor to the eventual October revolution. The second Lenin heard the March Revolution was taking place he immediately returned to Russia from exile in Europe, via a specially provided train from the Germans who were hoping he might cause more chaos. When Lenin arrived at Petrograd station he set out the Bolshevik programme in his ?April Theses?. This contained 2 very important and influential slogans: ?peace, land and bread? and ?all power to the soviets? which contrasted sharply with the cautious message of the provisional government. Support for the quick acting and appealing promises the Bolshevik?s were making rapidly increased, in particularly in the army and the soviets. However, an unknown Menshevik writer in 1917 said ?The Bolshevik speaker would ask ?do you need more land? ...read more.

Economic problems including inflation, food shortages and the unsuccessful war increased discontent for the current regime and made it easier for Lenin to get the people on his side and in support. Even though Lenin did not cause these factors; he used them very much to his advantage in gaining support and then seeing through the revolution. In Conclusion, In the February revolution Lenin played a very minimal role and hardly affected it at all, the only way he might have done is if his ideas written in Bolshevik newspapers had been being spread around, which is probable but not exactly certain and maybe only a small percentage of Russians even knew who he was. However his part in the November revolution was much more important. I believe that even though the November revolution was widely labelled as Lenin?s revolution it was not fully down to him and his sole contribution. Lenin certainly had a bigger role in the revolution than anyone else but great historical changes cannot be pinned down to individuals. I very much agree with historian Robert Service?s point written in 1990 that ?there were other mighty factors at work as well in Russia in 1917? Lenin simply could not have or even co-ordinated everything.? He played very much so a catalytic role in the revolution by co-ordinating it, convincing doubters and planning the whole arrangement, his theories revolutionised the minds of the people and without him this sought of revolution would never gone ahead even if he did make up some promises he couldn?t fulfil along the way. ...read more.