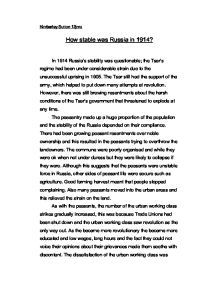 Kimberley Sutton 12jmc How stable was Russia in 1914? In 1914 Russia's stability was questionable; the Tsar's regime had been under considerable strain due to the unsuccessful uprising in 1905. The Tsar still had the support of the army, which helped to put down many attempts at revolution. However, there was still brewing resentments about the harsh conditions of the Tsar's government that threatened to explode at any time. The peasantry made up a huge proportion of the population and the stability of the Russia depended on their compliance. There had been growing peasant resentments over noble ownership and this resulted in the peasants trying to overthrow the landowners. ...read more.

The dissatisfaction of the urban working class was definitely an instability however the power of the strikes were weak and the Tsar, who still had military support was able to crush them with little difficulty. The 1905 uprising relied on the support of the educated, liberal middle-classes in 1914 the liberal was losing support in the Duma therefore the chance of unrest, rapidly, was minimal. That is not to say there was not dissent; middle-class were unorganised and refused to join with other parties. They were suffering under an asinine government and they took every opportunity to criticise it. The middle-classes were extremely unstable at this point in Russia but they were not ready for revolution. ...read more.

They had no faith in him and he had no connection with the people. He had a minute support base, social change had happened and there was less nobility and gentry to offer support him. His ties with the Tsarina and Rasputin were made him unpopular and any major problems would reveal a nest of animosity. The one positive aspect was the Tsar still had military support, while he still had that he was able to quell unrest with surprising swiftness. Overall, in 1914 Russia was a hotbed of bitter resentments and its stability was erratic. In some respects a revolution could not truly form because of the swift treatment of revolutionaries and it was stable as long as there were no major struggles. However, under the surface Russian people were seething with a discontent that threatened to spill over at the slightest disruption. ...read more.