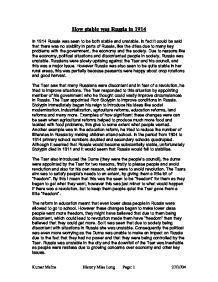 How stable was Russia in 1914 In 1914 Russia was seen to be both stable and unstable. In fact it could be said that there was no stability in parts of Russia, like the cities due to many key problems with the government, the economy and the society. Due to reasons like the economy, political situations and discontented people in society, Russia was unstable. Russians were slowly uprising against the Tsar and his council, and this was a major issue. However Russia was also seen to be quite stable in her rural areas, this was partially because peasants were happy about crop rotations and good harvest. The Tsar saw that many Russians were discontent and in fear of a revolution, he tried to improve situations. The Tsar responded to this situation by appointing member of his government who he thought could vastly improve circumstances in Russia. ...read more.

The Tsars aim was to satisfy people's needs to an extent, by giving them a little bit of "freedom". By this I mean that this was the seen to be "freedom" for them as they began to get what they want, however this was just minor to what would happen if there was a revolution, but to keep them people quiet the Tsar gave them a little "freedom". The reform in education meant that even lower class people in Russia were allowed to go to school. However these changes began to make lower class people want more freedom, they might have believed that due to them being discontent, which could lead to revolution made them have "freedom" then they believed that they could get more. So it was seen that due to society being discontent with situations in Russia she was unstable. ...read more.

In 1914 Russia join the World War however they weren't quite stable, as a result there were many problems, for example poor railway and poor roads. The joining of the war, with Britain and France also showed how circumstances came fourth. She wasn't ready for the war and this also lead to the more Russian instability. Overall Russia at the beginning seemed to be unstable and in turmoil, with Russian people rising up against the Tsar and his council. The Tsar was smart and so he made some changes which would briefly halt the matter of revolution. But as all seemed to be going well (Russia began to stabilize) and that changes began to settle in to wide areas of Russia, that she went to war against Germany. Russia was in serious trouble as she was not quite ready for the war because she was still a bit unstable and also the fact that revolution was inevitable. Kumar Mehta History Miss Long Page: 1 27/1//04 ...read more.