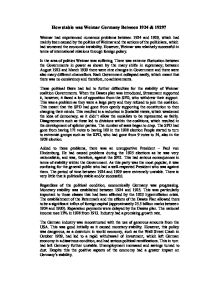 How stable was Weimar Germany Between 1924 & 1929? Weimar had experienced numerous problems between 1924 and 1929, which had mainly been caused by the politics of Weimar and the actions of the politicians, which had worsened the economic instability. However, Weimar was relatively successful in terms of international relations through foreign policy. In the area of politics Weimar was suffering. There was extreme fluctuation between the Governments in power as shown by the many shifts in supremacy; between August 1923 and March 1930 there were nine changes in Government and there were also many different chancellors. Each Government collapsed easily, which meant that there was no consistency and therefore, no achievements. These political flaws had led to further difficulties for the stability of Weimar coalition Governments. When the Dawes plan was introduced, Stresemann supported it, however, it faced a lot of opposition from the SPD, who withdrew their support. This was a problem as they were a large party and they refused to join the coalition. This meant that the SPD had gone from openly supporting the constitution to then changing their minds. ...read more.

However, this policy was dangerous, as a downturn in world economy, such as the Wall Street Crash in October 1929, had led to a rapid withdrawal of investment, which left German economy in a disastrous condition, and had serious political ramifications. This in turn had left Germany further unstable. Unemployment increased and savings turned to dust. Despite this the positive aspects of the economy had a greater impact on Germany's stability. Although the economic and political situations were weak during these five years, international relations were strengthened. The changes in Government in Britain in January 1924, to MacDonald, and in France in April 1925 to Briand, had enabled Stresemann to improve allied relations. The new Prime Ministers wanted to improve diplomacy and avoid war. Whereas the previous Governments still remembered WWI and, therefore resented Germany. When the Governments changed they were more sympathetic and understanding towards Germany. The change of Governments combined with the diplomatic skills of Gustav Stresemann, the foreign minister and the chancellor in 1925, allowed Germany to excel in foreign affairs. ...read more.

Radicals were able to act as a destabiliser, as some people thought Stresemann was taking too long they turned to radicals who offered fast relief. It was particularly important to try and stabilise Germany, as WWI had serious repercussions that had still not been taken care of by 1924. There were serious problems with the economy before this period in time, for example the problem of hyperinflation in 1923. Weimar had a responsibility to suppress all the problems instead of bringing them to the forefront and heightening them. Politically, Weimar was unsuccessful and extremely unstable. It was not popular with the public and it failed in its main objectives. Economically Weimar was fairly successful, although the Wall Street Crash had caused numerous problems, it was an unforeseen circumstance. In spite of the majority of Stresemann's foreign policies being successful, domestic political stability was not achieved. The Treaty of Versailles had plagued politics, it had made it very difficult for Weimar to stabilise Germany. It affected politics as shown by the 'Stab in the back theory' and the 'War Guilt Clause', it influenced the economy due to the reparations, and it influenced international relations due to the fact that Germany had lost the war. ...read more.