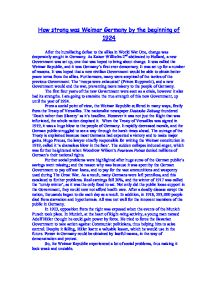 How strong was Weimar Germany by the beginning of 1924

How strong was Weimar Germany by the beginning of 1924 After the humiliating defeat to the allies in World War One, change was desperately sought in Germany. As Kaiser Willhelm 2nd abdicated to Holland, a new Government was set up, one that was hoped to bring about change. It was called the Weimar Republic, and it was Germany's first ever democracy. It was set up for a number of reasons. It was hoped that a new civilian Government would be able to obtain better peace terms from the allies. Furthermore, many were sceptical of the tactics of the previous Government. The 'troops were exhausted' (Prince Rupprecht), and a new Government would end the war, preventing more misery to the people of Germany. The first four years of the new Government were seen as a crisis, however it also had its strengths. I am going to examine the true strength of this new Government, up until the year of 1924. From a social point of view, the Weimar Republic suffered in many ways, firstly from the Treaty of Versailles. The nationalist newspaper Deutsche Zeitung thundered 'Death rather than Slavery' as it's headline. However it was not just the Right that was infuriated, the whole nation despised it. When the Treaty of Versailles was signed in 1919, it was a huge blow to the people of Germany. ...read more.

All occupied territories in Africa were given to the allies, hitting morale even more. Of the lost territories, some of the prized and precious land Germany owned was taken ruthlessly. The port of Danzig, a major port involved in the process of import and export was given to the League of Nations. Also, Alsace-Lorraine, an area rich in iron ore deposits, returned to its previous owner, France. This particularly annoyed the Germans, however Weimar did not push for its return. However the loss of the industry rich Ruhrland to the French, would have dented the German economy drastically. The French took over the Ruhr, after claiming that the Germans had unfairly stopped paying the reparation fee. The money gained from owning the coal and steel factories would have been seen as a fair trade for this loss of money. However, the German factory workers went on strike, and therefore produced nothing. This is known as passive resistance. To combat the vast reparation fee, the German Government thought they were on to a winner when they had a new plan. The idea was to print more money, which could help to pay off war-loans, the reparation fee, the loss of money from the Ruhrland factories, and to pay compensation to the war victims. 'Germany was burdened with intractable problems arising out of the war' (Carr). ...read more.

Each party in the Coalition will differ on their views over most problems. This makes passing laws a difficulty because of the intense bickering amongst them, so not a lot gets done. A political positive was the fact that both men and women had the right to vote, something which was extremely rare in Europe at the time, and was not even present in Great Britain. The Government was also Democratic, a far cry from previous, autocratic Governments. The problem with an autocracy is that one person holds complete and undisputed power, seen nowadays in Iraq, who are under the dictatorship of Saddam Hussein. However the main political plus was the fact that the Weimar Republic had pulled itself through the previous 4 years, which included major problems, for example hyperinflation. To conclude, despite the German economy recovering from a hyperinflation crisis, the foundations for a future collapse had been laid. It had inflicted wounds which in the long term would contribute to Weimar's death. However, the Government could have been over in the first four years if the opposition had gathered support, and been stronger and better organised. Answering the question on how strong the Weimar Republic was by 1924, it looked stable from the outside, but it was weak on the inside. When a future crisis arises however, the Weimar Republic has a strong possibility of collapse, and this can be seen when a certain Wall Street Crash comes into the picture. ...read more.