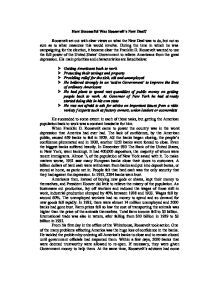 How Successful Was Roosevelt&amp;#146;s New Deal?

How Successful Was Roosevelt's New Deal? Roosevelt set out with clear views on what the New Deal was to do, but not so sure as to what measures this would involve. During the time in which he was campaigning for the election, it became clear the Franklin D. Roosevelt wanted to use the full power of the United States' Government to relieve Americans from the great depression. His main priorities and characteristics are listed below: > Getting Americans back to work > Protecting their savings and property > Providing relief for the sick, old and unemployed > He believed strongly in an 'active Government' to improve the lives of ordinary Americans > He had plans to spend vast quantities of public money on getting people back to work. As Governor of New York he had already started doing this in his own state > He was not afraid to ask for advice on important issues from a wide variety f experts such as factory owners, union leaders or economists He succeeded to some extent in each of these tasks, but getting the American population back to work was a constant headache for him. When Franklin D. Roosevelt came to power the country was in the worst depression that America had ever had. The lack of confidence, by the American public, caused 659 banks to fail in 1929. AS the banks began closing, the people's confidence plummeted and in 1930, another 1352 banks were forced to close. Even the biggest banks suffered heavily. In December 930 The Bank of the United States, in New York, went bankrupt. It had 400,000 depositors, the majority of whom were recent immigrants. Almost 1/3 of the population of New York saved with it. To make matters worse, 1931 saw many European banks close their doors to customers. A billion dollars of hard cash were withdrawn from banks and put into deposit boxes, or stored at home, as panic set in. ...read more.

The circling ravens perhaps indicate that the N.K.B.D. had complete control over the people. On 12th December 1938 Stalin signed the death sentence of 3182 innocent people and then went to watch a film in the evening and these pyramids are the results of these, as well as other, acts of Stalin. Stalin is gesturing towards the pyramids as if he was proud of his achievements. This source tells us that Stalin killed a great number of people and showed no remorse for doing so. This source depicts Stalin as a monster rather than a man. Source B is a painting, which depicts Stalin mingling with workers, insinuating that he is a man of the people. It is an official Soviet painting, showing that it conforms to the 'Socialist Realism' Policy that Stalin introduced to ensure that all pictures, songs and pieces of writing corresponded with Stalin's views and policies and did not portray them in a negative light. Source B shows Stalin as a sociable and popular character. In the background is a dam, similar to the Dneiper dam, which meant that Russia had the largest Hydro-Electric Power station in Europe. In reality, these projects were often using forced labour, usually inmates in a gulag. In the painting, the workers are happy and are talking to Stalin. This painting has undergone the 'Socialist Realism' policy and so could not possibly show Stalin in a negative light, as the creator would, most likely, have been punished. This painting was created during the 1930's when the first five-year plans were in place. The aim of these plans was to modernise Russia from a backward peasant society into a modern industrial state, which was able to withstand the threat of any future foreign invasion. One of the targets that Stalin set was for the amount of electricity produced to increase to 22 million kilowatts. The dam is shown in the painting was regarded as essential to achieve this goal. ...read more.

This is possibly because what they did or said, or who they were was not important. Stalin simply wanted to show the rest of the worlds that Russia was a democratic nation but it was obvious that this was not the case. Even though the trial is not important as the outcome would have been decided long before anybody was formally, the entire trial has to be annotated to be used for propaganda purposes to 'brainwash' the Russian people that the accused were to blame for the problems of Russia. Source J is mocking Russia as a whole, rather than just the show trials. This is because the cartoonist is saying that no matter how democratic Russia tries to make anything, Stalin is still in control as he has control over everyone. Source I is mocking the actual trials and, although it does illustrate how un-democratic Russia is, the main focus is on the trails themselves. Both sources were written in Capitalist countries and both sources portray the show trials as absurd and un-democratic. They both show that Stalin was in control of Russia and that the outcome of the trials has already been decided. Source J is very serious, as Stalin's posture is one of Authority as he speaks whereas in Source I, the posture of those who are accused is comical, seeking to belittle the democratic element in Russia even more. The reason for this could be that America was not involved in the war until a later date and so could use a comedy to undermine Russia. France was in the war, which at that time was against Germany, and Russia was allied to Germany following the Rapallo Treaty of 1922. This means that the French would be much more hostile towards Russia and so would use a much more serious tone. Source J does not show the accused, and it does not show what will happen to the accused, probably as the cartoon is focussing on Russia's totalitarianist regime by using the show trials as an example, rather than directly mocking the show trials. ...read more.