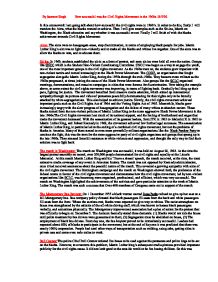 How successful was the Civil Rights Movement in the 1960s

By Jasmeet Singh How successful was the Civil Rights Movement in the 1960s 18/5/02 In this coursework I am going talk about how successful the civil rights were in 1960's. In order to do this, firstly I will mention the Aims, what the blacks wanted to achieve. Then I will give examples such as the Sit-ins, March on Washington, the Black education and say whether it was successful or not. Finally I will finish of with the blacks achievement towards Civil Rights Movement Aims: The aims were to desegregate areas, stop discrimination, in terms of employing black people for jobs. Martin Luther King's aim was to fight non-violently and to make all the blacks and whites live together. One of the aims was to allow the blacks to vote, and to educate them. Sit Ins: In 1960, students established the sit-in as a form of protest, and soon sit-ins were held all over the nation. Groups like SNCC which is the Student Non-Violent Coordinating Committee. SNCC was begun as a way to engage the youth, one of the most important groups in the civil rights movement. ...read more.

The march on Washington highlighted the achievements of the activists and gave particular attention to the work of Martin Luther King. The march was such a success that Over 400 members of Congress came out in support of the march. The Montgomery Bus Boycott: On 1 December 1955 a black woman named Rosa Parks refused to give up her seat on a full Montgomery bus. Bus company policy dictated that black passengers fill seats from the back and white passengers fill seats from the front. Where the sections met, blacks were expected to give way to whites. The racist atmosphere on buses was strengthened by the attitude of the all-white driving staff, which was known to harass black passengers verbally, and sometimes physically. The Montgomery improvement association had a plan of action for the protest that was officially to begin on December 5. The decision basically stated three demands: (1) Blacks would not ride the buses until polite treatment by bus drivers were guaranteed to them, (2) Segregation must be abolished on buses, (3) The employment of black bus drivers. From day one, the bus boycott proved to be immediately successful. ...read more.

In 1964 a more sweeping civil rights bill outlawed racial discrimination in public accommodations and by employers, unions, and voting registrars. Congress passed a voting rights bill in 1965. After 1965, the focus of the civil rights movement began to change. Martin Luther King focused on poverty and racial inequality in the North. Younger activists criticized his strategy. In 1968, King was assassinated in Memphis, Tennessee. The main opponent of King's policies was SNCC, led by Stokely Carmichael. In 1968, the Black Panther Party emerged, using violence to achieve its goals. The Civil rights movement received even more support from those outside the Deep South. Many inhabitants of Birmingham itself now moved in the direction of desegregation. The Sit ins succeeded in getting number of public facilities. Segregation in public areas such as parks was largely abandoned. By the end of 1961, 810 towns and cities had desegregated public areas. However the Deep South remained largely unaffected. Here attitudes were hardening rather than softening. As mentioned before, not all things were perfect, but at least segregation was stopped. There was to be no discrimination on any federally aided programmes. Many changes had been made, in 1960s sit-ins took place. Freedom rites in 1961 and in 1963 the March in Birmingham, Alabama and finally the March on Washington took place. ...read more.