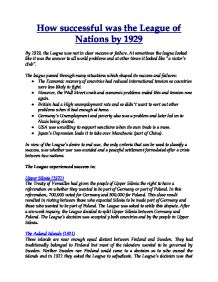 How successful was the League of Nations by 1929.

How successful was the League of Nations by 1929 By 1929, the League was not in clear success or failure. At sometimes the league looked like it was the answer to all world problems and at other times it looked like "a victor's club". The league passed through many situations which shaped its success and failures: * The Economic recovery of countries had reduced international tension so countries were less likely to fight. * However, the Wall Street crash and economic problems ended this and tension rose again. * Britain had a High unemployment rate and so didn't want to sort out other problems when it had enough at home. * Germany's Unemployment and poverty also was a problem and later led on to Nazis being elected. * USA was unwilling to support sanctions when its own trade is a mess. * Japan's Depression leads it to take over Manchuria (part of China). In view of the League's desire to end war, the only criteria that can be used to classify a success, was whether war was avoided and a peaceful settlement formulated after a crisis between two nations. The League experienced success in: Upper Silesia (1921) The Treaty of Versailles had given the people of Upper Silesia the right to have a referendum on whether they wanted to be part of Germany or part of Poland. ...read more.

The league helped in: * 400,000 Prisoners of War repatriated * Turkish refugee camps helped (1922) * Work against leprosy (extermination of mosquitoes) * Attacks on slave owners in Sierra Leone and Burma; Freed 200,000 slaves in Sierra Leone. * ILO (international labour organisation) successful in: Limiting children's working hours. Banning white lead from paint. Campaigning for improved working conditions. * Recommended marking shipping lanes. * Produced international Highway Code. * Challenged forced labour for railway building in Africa. After stating the success, the failures should be discussed to determine how successful the League was. Article 11 of the League's Covenant stated: "Any war of threat of war is a matter of concern to the whole League and the League shall take action that may safe guard peace." Therefore, any conflict between nations which ended in war and the victor of one over the other must be considered a League failure. Activity outside the League of Nations This is a sign that most countries relied, not on the League, but on separate treaties to keep them safe: * During the 1920s a number of international agreements were reached, mostly outside the League of Nations. * The two most important of these were the Locarno Treaties and the Kellogg-Brand Pact. The Locarno Treaties were signed in 1925. ...read more.

In conclusion, I would finish by measuring the League of Nations against its aims: * to stop war * to improve people's lives and jobs * to get disarmament * To enforce the Treaty of Versailles (oh yes - what about appeasement? German disarmament? Rhineland? Anschluss? reparations? TOTAL failure here, i think!) The first point was a total failure. WW2 broke out and one of Hitler's aims was to destroy the treaty of Versailles which was what the league was trying to impose. The league did succeed quite well in the second point were it did help with social issues as mentioned before. This was one good thing the league done. The third point was also a totally failure. Treaties were signed to limit armies, (the Washington conference), which was totally contradicting the league. The league said "disarmament" which meant NO armies. The fourth point was also a failure. The treaty of Versailles included the appeasement, German disarmament, Rhineland, Anschluss, and reparations. None of these was not subject to a change. All were tampered with n twisted to suit the strong countries that were looking for their own gain. I conclude by saying the League of Nations was quite a failure by 1929, apart from the social successes which were quite good. Maryam Ali ...read more.