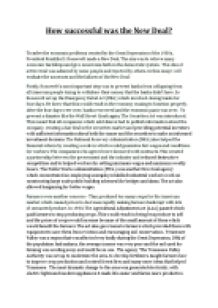 How successful was the New Deal?

﻿How successful was the New Deal? To solve the economic problems created by the Great Depression of the 1930s, President Franklin D. Roosevelt made a New Deal. The aim was to relieve many economic hardships and give Americans faith in the democratic system. The idea of a New Deal was admired by some people and rejected by others. In this essay I will evaluate the successes and the failures of the New Deal: Firstly, Roosevelt?s most important step was to prevent banks from collapsing from all American people trying to withdraw their money that the banks didn?t have. So Roosevelt set up the Emergency Relief Act (ERA) which involved closing banks for four days. He knew that this would result in the economy ceasing to function properly. After the four days were over, banks recovered and the economic panic was over. To prevent a disaster like the Wall Street Crash again, The Securities Act was introduced. This meant that all companies which sold shares had to publish information about the company, creating a fair deal in the securities market and providing potential investors with sufficient information about both the issuer and the securities to make an informed investment decision. The National Recovery Administration (NRA) ...read more.

FERA operated a wide variety of work relief projects such as: construction work, projects for professionals ? actors/actresses, writers and musicians- and food production. The Civilian Conservation Corps (CCC) also helped improve the lives of the unemployed. It gave unemployed young men work on environmental projects like: Structural improvements, forest protection and building roads and airport landing fields. Even though the men worked hard, they were paid poorly. Roosevelt helped those in danger of losing their homes by providing mortgage assistance to homeowners or would-be homeowners by providing them money and giving them low interest loans, which would help people meet their mortgage payments. This was accomplished by selling bonds to lenders in exchange for the home mortgages. This act was called the Home-owners Loan Corporation (HOLC). But there are some cons to President Roosevelt?s ways of recovering America from The Great Depression: Businessmen and the Republican Party had thought that the New Deal had gone too far. They said that the New Deal made Americans far too dependent on the Governments help. They thought it was wrong for the government to give Americans pensions and sickness benefits and creating work for unemployed people. Some Businessmen were angry that the New Deal allowed trade unions into the workplace; they believed that it?s unnecessary government interference in how they ran their business affairs. ...read more.

Huey Long made a scheme called ?Share Our Wealth? promised to tax the rich and give their money to the poor. This money going to poorer people would give all American families the money to buy a home, car and a radio. Huey Long became a National figure when he became a senator Of Louisiana. If he had not been assonated in 1935, he might have stood against Roosevelt. Another critic of Roosevelt was Dr Francis Townsend, who said the New Deal didn?t go far enough; it didn?t give people over 60 a pension. He recommended a plan by which every American over 60 was given a pension of $200 per month on condition that they spent the money within a month. Dr Townsend said that this would give a big boost to the economy and decrease unemployment. To conclude, history tells us that the New Deal was successful. It didn?t solve employment altogether but it certainly reduced it. It didn?t solve all the problems that the Great Depression caused but it did alot to protect Americans from its worst effects. One of the biggest aims was to put the USA back to work, the New Deal made agencies help fulfill that aim like the CCC, the PWA and the AAA. Millions of American people were found work through the government-sponsored projects. American also benefitted from the work carried out ? schools, new roads and hospitals. ...read more.