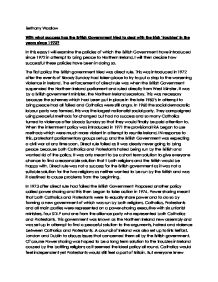 How successful were the British Government in brining peace to Ireland?

Bethany Wadlow With what success has the British Government tried to deal with the Irish 'troubles' in the years since 1972? In this essay I will examine the policies of which the British Government have introduced since 1972 in attempt to bring peace to Northern Ireland, I will then decide how successful these policies have been in doing so. The first policy the British government tried was direct rule. This was introduced in 1972 after the events of Bloody Sunday had taken place to try to put a stop to the worsening violence in Ireland. The enforcement of direct rule was when the British Government suspended the Northern Ireland parliament and ruled directly from West Minster. It was by a British government minister, the Northern Ireland secretary. This was necessary because the schemes which had been put in place in the late 1960's in attempt to bring peace had all failed and Catholics were still angry. In 1960 the social democratic labour party was formed, this was the largest nationalist social party. They campaigned using peaceful methods for changed but had no success and so many Catholics turned to violence after bloody Sunday so that they would finally be paid attention to. When the internment policy was introduced in 1971 the provisional IRA began to use methods which were much more violent in attempt to reunite Ireland. IN response to this, protestant parliamentary groups set up and the British Government was expecting a civil war at any time soon. Direct rule failed as it was clearly never going to bring peace because both Catholics and Protestants hated being run by the British and wanted rid of the policy. ...read more.

An increase in violence between 1990 and 1993 between the loyalists and the IRA showed great need for the Downing Street declaration yet Sinn Fein detested it as his views were that it prevented a united Ireland. Politicians had mixed opinions about the declaration but the SDLP and the Ulster Unionist party welcomed it with open arms. The Downing Street declaration was only ever meant to set a basic plan between the British and Irish governments but the simple policy was a failure as it was not seen as a long term lasting solution although it was a step in the right direction. The policy also failed as it did not do as it aimed to by immediately stopping the violence, as there were many more killings in summer 1994. Yet it could be argued that the Downing Street declaration was mildly successful and did make an impact because on the 31st of August the IRA called a cease-fire and on the 13th of October so did the loyalists. However as the declaration was not a permanent fixture this peace was likely to be rare and short-lived and so the declaration was not much of a success. Though the Downing Street declaration did lead to a chain of positive events beginning with Senator George Mitchell setting up Principles for decommissioning weapons in 1996. Then following this in 1997 Tony Blair became the new Prime Minister of Britain and appointed Mo Mowlam as secretary of state for Northern Ireland. She did many things that had never been tried before such as visiting IRA terrorists inside jail and talking with them, Margaret Thatcher had refused to ever communicate with terrorists and therefore this big step helped gain support of the peace process from both religions. ...read more.

Also the Good Friday agreement was suspended whenever the two sides would not speak. The IRA also played a huge part in acting as a barrier to bringing peace to Northern Ireland, they brought violence, decommissioning problems and also affected Sinn Feins place in peace talks. The British government tried many things to solve the problems of conflict in Ireland, but were always met with little success. However each new policy did bring a small amount of change before the problems started again. I feel that the British government has given NI and particularly the catholic more say in how their country is run, so after the Good Friday agreement was introduced the two sides would not talk and so the agreement was abandoned. The British government has tried many different things to bring peace to NI. Some have been more successful than others and there is certainly less violence of the streets of Northern Ireland today. There have been many years when peace seemed like it was never going to happen. Today the idea set up by the good Friday agreement is finally working and both Catholics and protestants are prepared to work together to make northern Ireland a success. The IRA still exists today but it is no longer so violent and is not seen as a threat. Although after examining all the policies the British government have introduced I believe that the one which helped most to deal with Northern Irelands 'troubles' was the Good Friday agreement as it is still in place today and involves the contribution of both Catholics and protestants. However the British Government themselves have not been entirely successful as they have had to continuously introduce new policies and nothing has stayed consistent. ...read more.