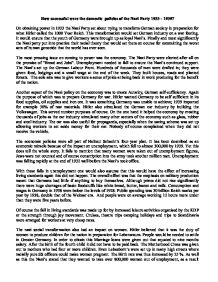 How successful were the domestic policies of the Nazi Party 1933 - 1939? On obtaining power in 1933 the Nazi Party set about trying to transform German society in preparation for what Hitler called the 1000 Year Reich. This transformation would set German industry on a war footing. It would ensure that the youth of Germany were brought up as loyal Nazi's. Finally and most significantly the Nazi party put into practice their racial theory that would set them on course for committing the worst acts of human genocide that the world has ever seen. The most pressing issue on coming to power was the economy. The Nazi Party were elected after all on the promise of "Bread and Jobs". Unemployment needed to fall to ensure the Nazi's continued support. The Nazi's set up the German Labour Front. Hundreds of thousands of men were drafted in; they were given food, lodgings and a small wage at the end of the week. They built houses, roads and planted forests. The sole aim was to give workers a sense of pride at being back in work producing for the benefit of the nation. Another aspect of the Nazi policy on the economy was to create Autarky, German self-sufficiency. Again the purpose of which was to prepare Germany for war. ...read more.

The nazi social transformation also had an impact on women. Hitler believed that it was the duty of women to produce children for the nation in preparation for Lebensraum. People would be needed to settle in Greater Germany. In order to obtain this Marriage loans were given out that equated to nine months salary. After the birth of the fourth child it did not have to be paid back. The Motherhood Cross was given out to mothers who had four or more children. Even Lebesborn's were set up in many high streets where racially pure SS officers could make women pregnant. The Birth rate was thus increased by 25 %. As well as this the Nazi's stated that they wanted to take over 800,000 women out of employment, as a result doctors, layers, judges and teachers were sacked. Again this backfired s a serious shortage of Labour occurred in Germany forcing the Nazi party into a U-turn that compelled women into a duty year. Another important aspect of domestic policy was the transformation of the education system. Hitler realised that the key to maintaining power was by controlling the youth of Germany. If he could brainwash the youth at an early enough age their loyalty would be guaranteed. The whole education system was geared towards creating young Nazis. ...read more.

Gypsies, blacks, mentally ill people in total another 200,000 people. The effectiveness of the Nazi regime can also be judged by the lack of opposition. Although this was partly due to the success of the Gestapo and the SS, there can be no doubt that many Germans welcomed or at the least turned a blind eye to what was going on. The Trade Unions had been banned, the opposition leaders had been arrested and their parties outlawed. Even small groups like the Edelweiss Pirates could not really be considered as effective opposition and so there was no effective stance against the Nazis. Even the Catholic Church up until 1937 remained silent. The Protestant Church was divided and this made it easier to control. Martin Niemoller, the leader of the congregational church, was arrested and imprisoned for seven years for his attacks on the Nazi Party policies. The Nazis therefore were very successful in creating a state that fitted in with their ideas and beliefs. The economy was transformed so much so that German industry created the largest military machine in Europe. In the eyes of many Germans they successfully tackled unemployment. They increased the birth rate and removed many women from the job market. They engineered a social revolution among the youth to create a loyal following of Nazi's who would in time become the future soldiers of the Reich. Finally they succeeded in their aim of wiping out almost all of Europe's Jews with little if any real opposition. ...read more.