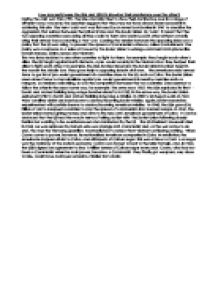 How successful were the USA and USSR in showing their dominance over the other?

How successful were the USA and USSR in showing their dominance over the other? During the cold war 1945-1991, the USA and USSR tried to show their dominance over in a range of different ways. However, the question suggests that they may not have always been successful in achieving this aim. The Term 'cold war' was first used by an American banker in 1947 to describe the aggression that existed between the United States and the Soviet Union. By 'cold', it meant that the two opposing countries were doing all they could to harm and destroy each other without actually using their armed forces creating a 'hot' war. Causing the tension between the opposing sides was a policy that the US was using, to prevent the spread of Communism abroad, called Containment. ...read more.

For example, the USA backed Israel and the Soviet Union backed Egypt in the wars in the Middle East. They gave help to opposing sides in civil wars.. The Americans used armed force to get rid of pro-soviet governments in countries close to the US, such as Cuba. The Soviet Union used armed force to stop rebellions against pro-soviet governments in nearby countries such as Hungary. As tensions were rising, so was the competition between the two countries. One seemed to follow the other in the exact same way, for example: The arms race: 1952: the USA exploded its first H-bomb and started building long-range bomber aircrafts. In 1953, in the same way, the Soviet Union exploded its first H-bomb and started building long range missiles. ...read more.

The US President Roosevelt died in 1945. He was replaced by Truman who was strongly anti-Communist and, as the war came to an end, the stop the Vietcong guerrillas. Eventually had to retreat from Vietnam achieving nothing. When Castro came to power, however, he nationalised American companies in Cuba. In retaliation, the Americans stopped all aid to Cuba, and all imports of Cuban sugar. This was a blow to Castro as sugar was the mainstay of the Cuban economy. Castro was forced to look to the USSR for help, and, in 1960, the USSR signed an agreement to buy 1 million tonnes of Cuban sugar every year. Castro, who had not been a Communist when he took power, became a Communist. They finally got weapons, very close to USA, could have destroyed America, missiles from Russia. ...read more.