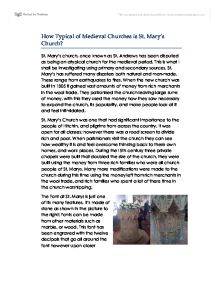 How Typical of Medieval Churches is St. Marys Church?

How Typical of Medieval Churches is St. Mary's Church? St. Mary's church, once known as St. Andrews has been disputed as being an atypical church for the medieval period. This is what I shall be investigating using primary and secondary sources. St. Mary's has suffered many disasters both natural and man-made. These range from earthquakes to fires. When the new church was built in 1305 it gained vast amounts of money from rich merchants in the wool trade. They patronised the church leaving large sums of money, with this they used the money how they saw necessary to expand the church, its popularity, and make people look at it and feel intimidated. St. Mary's Church was one that had significant importance to the people of Hitchin, and pilgrims from across the country. It was open for all classes; however there was a rood screen to divide rich and poor. When parishioners visit the church they can see how wealthy it is and feel overcome thinking back to there own homes, and work places. During the15th century three private chapels were built that doubled the size of the church, they were built using the money from three rich families who were all church people of St. ...read more.

In St. Mary's church there are three private chapels, these are the chapel of holy trinity, the chapel of St. John the Baptist and the St. Andrews Chapel. Together these three private chapels built in the 15th century almost doubled the size of the church. St. Andrews chapel built by the donation from the Pulter family is a great example to portray the churches wealth, along with the spectacular roof with its ornate carvings and angles above watching down on you it has a fantastic screen to enter it, called the angel screen. This is one of the most respected and well known screens for its decorations. The ceiling shows how influential church followers can be, the roof in this chapel has gold stars and gold angles looking down on you as shown in the pictures to the right. This chapel was named after the previous name of the church before it became St. Marys. Simon Jenkins mentions in his book that St. Oswald Church also boasts extravagant private chapels. "Malpas's two treasures are the Cholmandeley and Brenton Chapels, each divided from the nave by perpendicular screens with tracery of lace like delicacy"7 Other parish churches also have private chapels that are impressive and boast there quality's, "The Chapel is more ornate. ...read more.

Mary's. I believe that all the features I have talked about and investigated are typical of all parish churches in the way that they all have them. But the way and extravagance that St. Mary's features are decorated leads me to a final conclusion that St. Mary's church is atypical of other parish churches in the medieval period. St Mary's church was on the good end of a great wool trade in Hitchin, the money that was received from the rich merchants and patriots of the church led to every typical church feature being bigger, better, and a lot more ornately decorated. This extra detail in all areas of the church also did the job of enticing new church followers and patriots to possibly fund new projects in and around the church if the new followers were rich. During the medieval times all churches were well kept and had many followers, but St. Mary's had that extra benefit of rich followers that left a great deal of money for them to do and use as they pleased. So that's why I believe St. Mary's church is an atypical one, simply because of its extravagance and extremely ornate decorations. ...read more.