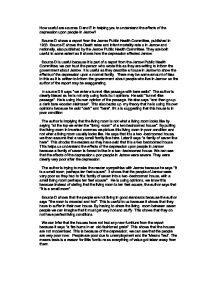 How useful are sources D and E in helping you to understand the effects of the depression upon people in Jarrow?

How useful are sources D and E in helping you to understand the effects of the depression upon people in Jarrow? Source D shows a report from the Jarrow Public Health Committee, published in 1933. Source E shows the Death rates and infant mortality rates in Jarrow and nationally, also published by the Jarrow Public Health Committee. They are both useful to some extent as it shows how the depression affected Jarrow. Source D is useful because it is part of a report from the Jarrow Public Health Committee; we can trust the person who wrote this as they are writing to inform the government about Jarrow. It is useful as they describe a house in Jarrow to show the effects of the depression upon a normal family. There may be some amount of bias in this as it is written to inform the government about people who live in Jarrow so the author of the report may be exaggerating. In source D it says ''we enter a tunnel-like passage with bare walls''. The author is clearly biased as he is not only using facts but opinions. He said ''tunnel-like passage''. He is using his own opinion of the passage. He also says ''and then go up a dark bare wooden staircase''. ...read more.

She never went to the doctor's and there was a post natal clinic but she didn't go. She said that she got no help with anything. This shows how tough it was on women as there was a possibility that they would die during labour. Overall I think that both sources help me to understand the effects of the depression. Source E is useful in showing how depression led to poor health and higher rates of death. I can see that the depression lead to poverty in Jarrow and this led to ill health. Source D shows me that the depression led to poverty. Source E then shows that the depression led to ill health and death. Both sources D and E were written by the Jarrow Public Health Committee, they would have researched their findings before reporting to the government. Source D backs up the statistical evidence in source E because source D shows poor hygiene and poverty which can relate to the high death rates and high infant mortality rates in source E. I think that source D is more limited than source E because source D only shows me a description of one house while source E shows me statistics comparing Jarrow and the National Average over the years. ?? ?? ?? ?? ...read more.