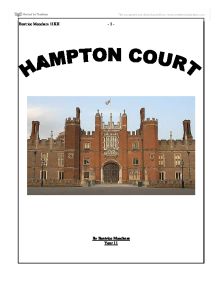 How useful is a visit to the Tudor parts of Hampton Court to find out how Henry VIII used the palace?

By Beatrice Meecham Year 11 History around us: Hampton Court Coursework Hampton Court is a Royal Palace built by Cardinal Wolsey in 1514 and taken over in 1528 by King Henry VIII. It is Situated in the London Borough of Richmond upon Thames in South west London on the bank of the River Thames. Today the palace is open to the public and is a large tourist attraction. Hampton Court has not been lived in by a Royal family since the 18th Century as it has been open to the public since 1838 and is now owned by the charity historical royal palaces. Hampton Court which was originally owned by Cardinal Wolsey was built by him to show off his wealth and status but by 1528 Wolsey had fallen from favour of the king and therefore it came to be the possession of the King. Once he owned the palace Henry began to enlarge it so it was able to hold the full royal court. Henry continued to add to the palace. The kitchens were quadrupled in size by 1529, the Great Hall was made more magnificent and the chapel was altered. Henry VIII used Hampton Court mostly for hunting, entertaining and demonstrating his superior power and wealth to his rich subjects and foreign ambassadors and visitors from abroad. Henry loved hunting and often came to Hampton Court in the autumn to hunt in the surrounding parks. It was important for Henry to entertain others as there were no newspapers or photography in Tudor times and therefore it was compulsory for Henry to meet others and be seen by his people. Henry owned many palaces. Lots of them were built along the river Thames just like Hampton Court. These palaces were: Greenwich, Richmond, Eltham, New Hall, White Hall and Hampton Court. All these palaces were placed along the Thames because in Tudor times the main form of Transport was by barge. ...read more.

Miniature models can help you discover what has changed around the palace and what things are the same. In conclusion I believe that although many parts of Hampton Court have been changed you can still use it to find out about how Henry used the palace. The parts that are still the same show just how grand Hampton Court was and this shows us that Hampton Court was used to impress others and show off. Even today things like the Great Hall and the astronomical Clock are still extremely splendid and magnificent this teaches us how Henry used his palaces to make a statement of how rich he was and of his high status. It is useful in some ways but not others as we can still see many parts of the palace but the main parts like Henry's private apartments are no longer there and therefore we can't discover how Henry used those parts of his palace, but by looking at different palaces from the same time period like Nonsuch and Eltham we can build a picture of how Henry used his palaces. We must consider all the available evidence to find out how Henry used his palaces, using written sources, pictorial sources, other remaining Tudor palaces and Hampton Court itself we can learn a lot about the ways the palaces were used and created to impress, entertain and for the business and private living of Henry VIII. I believe a visit to Hampton Court is useful because although many aspects have changed those that are still there can teach us a lot about how people lived in Tudor times. Guides and Costume actors can teach visitors new and interesting facts about the palace and Henry. Today although many aspects of the palace have changed either because of refurbishments or because a new owner of the palace wants to change things (like William and Mary) ...read more.

Many people would have believed Henry to be old fashioned because he was building a Great Hall but the Great Hall at Hampton Court was not at all unfashionable as it used modern materials and was built totally from scratch. Old Great Halls would not have been on the first floor like Henry's and visitors would not have entered it by going up a pair of very grand stone staircase like the one at Hampton Court. The Great Hall was used more as a very grand entrance hall for important guests rather than the old use as a dining hall. I believe that Simon Thurley's interpretation is correct; however my visit to Hampton Court does not support this. Hampton Court has a very grand and luxurious Great Hall but considering all the evidence can show that Hampton Court is one of only few Great Halls from the early 16th Century. Many of the original uses of the Great Hall in the middle ages were not needed anymore and therefore the number of Great Halls built decreased. There was no longer much use for a Great Hall other than for a dining place for servants and a place to hold entertainment such as balls and masques. The sources used may not be reliable and therefore I can't make my judgement based on just these facts that may or may not be dependable. I must look and discover using palaces still standing to find out if great halls were in fact in decline. Looking at the number of palaces shows that they were in decline in the early 16th century as they slowly lost their use. Most of the palaces totally commissioned by Henry were the palaces that did not contain Great Halls; therefore this shows that Henry did not believe he had much of a use for them. Although this is true; he did rebuild many Great Halls and so he must have believed they were worth all the money and effort. ?? ?? ?? ?? - 1 - Beatrice Meecham 11KH ...read more.