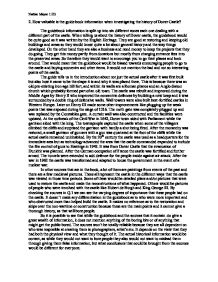 How valuable is the guide book information when investigating the history of Dover Castle?

2. How valuable is the guide book information when investigating the history of Dover Castle? The guidebook information is split up into six different zones each one dealing with a different part of the castle. When telling us about the history of Dover castle, the guidebook would be quite good as it was written by the English Heritage. They are good at restoring and keeping old buildings and areas so they would know quite a lot about general history and the way things developed. On the other hand they are also a business and need money to keep the projects that they do going. They get this money partly from donations but mostly from charging entrance fees into the preserved areas. So therefore they would want to encourage you to go their places and look around. That would mean that the guidebook would be biased towards encouraging people to go to the castle and buying souvenirs and other items. ...read more.

The north gate was completely plugged up and was replaced by the Constables gate. A curtain wall was also constructed and the facilities were updated. At the outbreak of the Civil War in 1642, Dover town sided with Parliament while the garrison sided with the king. The townspeople captured the castle when some of the villagers climbed the cliffs and surprised the garrison with hardly a shot being fired. After the monarchy was restored, a small garrison of gunners with a gun was quartered at the foot of the cliffs while the actual castle remained uninhabited. By the 20th century the castle was used as a headquarters for the immediate area but as technology advanced the area that the castle commanded expanded to include the fire control of guns to Hastings in 1943. It was from Dover Castle that the evacuation of Dunkirk was planned. ...read more.

It makes no reference as to the restoration and skips over the non-wartime or construction because these are the main points and it cannot give a thorough history, as that will bore people. So it is possible to see that while the guidebook and the sources that it contain do give a great wealth of information, it does not mention anything of the boring bits or of anything that might get the public bored. The sources won't be totally reliable because they are all dependent on who was respnsible at creating them ie photographers, artist's etc. It depends on the view that they had both the physical view and what they thought of it. The actual historical information would be correct, as while they would not want to bore people they also would not want to mislead them through giving them false information, but what conclusions that could be brought from the sources would be different for everyone. Nathan Mayer 11E2 ...read more.