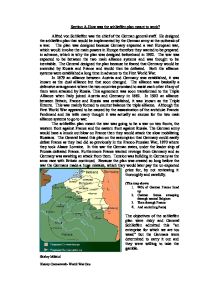 How was the schlieffen plan meant to work

Section A-How was the schlieffen plan meant to work? Alfred von Schlieffen was the chief of the German general staff. He designed the schlieffen plan that would be implemented by the German army at the outbreak of a war. The plan was designed because Germany expected a vast European war, which would involve the main powers in Europe therefore they wanted to be prepared in advance, which is why the plan was designed beforehand in 1902. The war was expected to be between the two main alliance systems and was thought to be inevitable. The General designed the plan because he feared that Germany would be encircled by Russia and France and would then be defeated. Both the alliance systems were established a long time in advance to the First World War. In 1879 an alliance between Austria and Germany was established, it was known as the dual alliance but that soon changed. The alliance was basically a defensive arrangement where the two countries promised to assist each other if any of them were attacked by Russia. This agreement was soon transformed to the Triple Alliance when Italy joined Austria and Germany in 1882. In 1902 an alliance between Britain, France and Russia was established, it was known as the Triple Entente. This was mainly formed to counter balance the triple alliance. Although the First World War appeared to be caused by the assassination of the archduke Francis Ferdinand and his wife many thought it was actually an excuse for the two main alliance systems to go to war. The schlieffen plan meant the war was going to be a war on two fronts, the western front against France and the eastern front against Russia. The German army would have a knock out blow on France then they would attack the slow mobilizing Russians. The General based this plan on the assumption that Germany could easily defeat France as they had did so previously in the Franco-Prussian War, 1870 where they took Alsace Lorraine. ...read more.

Haig's plan was to draw German soldiers away from Verdun, to get the pressure off it, and also kill as many Germans as possible. His first to attempts were unsuccessful but he didn't renounce, instead he kept trying until they captured Passchendale. This caused the stalemate because tactics like this became too common and in summary they should have surprised the enemy, leaving them weak and almost defenseless. Some blamed General Haig for the mass casualties and little advance shown. This is because his plans didn't show much achievement especially as no plan that could penetrate the enemy was actually thought up, which aided then prolonged the stalemate. Furthermore they had little limited choice in what to do to break the stalemate, which needed and strong plan to demolish either side and end the war. (This picture is of an aerial reconnaissance plane used during the war) One more factor, which also caused the development of a stalemate, was the use of aerial reconnaissance. Aerial reconnaissance was the use of planes to observe the positioning of the opposition then report back. They were known as "the eyes of the army". They carried two people- one pilot and one aerial observer who had to draw a picture of the situation below. However over time, during the war, these were updated and they begun taking photographs rather than drawings because these were clearer an avoided reporting wrong information. Aerial reconnaissance contributed to the development of the stalemate quite greatly. This is because both sides knew that if they were receiving valuable information from their pilots, the other side must have been doing the same. Therefore neither side had the advantage of aerial reconnaissance alone, again it was another factor like weaponry or trenches that both sides had. Hence if both sides had this type of resource then both sides could be prepared for enemy plans, similarly to the battle tactics used, where the opposition could no longer be surprised and there would be minimum advance in position, hence the stalemate. ...read more.

In conclusion I do agree that new technology, U.S. entry to the war, the British blockade and the German offensive were all factors which contributed to ending the stalemate however I do not agree that they were equally important because some factors contributed to a much further extent than others. I think that the new technologies contributed the least and to a very small extent to the breakthrough because both sides had the same technologies. Furthermore I think that the late entrance of the Americans was the most important contributor to the stalemate. Even though America still had to prepare their army, they were still overpowering the Germans who had exhausted troops, which had been fighting for many years, whereas the Americans had new fresh soldiers, which were energetic. However a disadvantage here was that America had to prepare their army, this benefited the Germans because after they caused the Russian revolution Russia decided to make peace with Germany and consequently now Germany were able to transfer their troops back to the western front from the eastern front. This is where the British blockade had a great impact. Because of the blockade Germany was still weaker regardless of how many troops they had because all the troops were underfed and knackered, especially compared to the opposition as America was transferring 50,000 monthly to the western front. Therefore because of these mass numbers of troops and supplies being transferred the Germans couldn't cope with their opposition especially as these transfers were also raising the French and British morale. This is why I think that the American entry to the war was the most important factor to the breakthrough. Furthermore the British Blockade was also an important factor alongside the U.S. entry because while the Ludendorff plan was put into action the German troops were hungry, because of the Blockade, which is why they were advancing so slowly causing so many deaths and going against the Germans and benefiting their opposition. Shirley Mikhiel History Coursework- World War One ...read more.