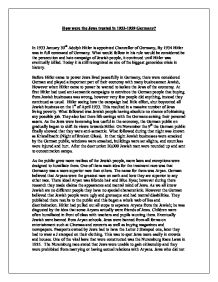 How were the Jews treated in 1933-1939 Germany? In 1933 January 30th Adolph Hitler is appointed Chancellor of Germany, By 1934 Hitler was in full command of Germany. What would follow in his rule would be considered be the persecution and hate campaign of Jewish people, it continued until Hitler was eventually killed. Today it is still recognized as one of the biggest genocides crisis in history. Before Hitler came to power Jews lived peacefully in Germany, there were considered German and played a important part of their economy with many businessmen Jewish, However when Hitler came to power he wanted to isolate the Jews of the economy. At first Hitler had used anti-semantic campaigns to convince the German people that buying from Jewish businesses was wrong, however very few people did anything, instead they continued as usual. Hitler seeing how the campaign had little effect, shut boycotted all Jewish business on the 1st of April 1933. This resulted in a massive number of Jews living poverty. ...read more.

Eventually Jewish were banned from Aryan schools. Jews were banned from all forms on entertainment such at Cinemas and concerts as well as buying magazines and newspapers. Passports owned by Jews had to have the Letter J Stamped one, later they had to wear a J stamped on their clothing. This was to spot Jews more easily in crowds and houses. One of the vital laws that were constructed was the Nuremburg Race Laws in 1935. The Nuremburg race stated that Jews were unable to gain citizenship and they were prohibited from marrying or having sexual relations with Aryans. Jews who did not possess recognizably Jewish names, males were forced to add Israel whilst females added Sarah to their name. The aim of Hitler was to drive the Jews out, not to murder them. The Jews who wanted to flee were not permitted to bring personal belongings or valuables. The Jews fled to a variety of countries, some went to Europe and the East, but the majority went to Palestine. ...read more.

Sadly this stopped being a reality and ended being nothing more than a dream after 1933. Hitler's rise to power and hateful views had inspired a nation to change. One man could change the way Jew's life forever. What followed was a hate campaign designed to drive the Jews out of Germany, this led on for Hitler's dream to slaughter every Jew in Europe. Rich or Poor, Young or Old it didn't matter. In less than a decade a decade more than 6 Million Jews were murdered. Either by Death squads, Gas Chambers or any other form of torture they were killed. Even today the survivors and relatives still grieve for there loved ones who did not survive. Today there is little chance that this could ever happen with the current World Laws, but let us understand it only took one man with ideas to change Germany and the World Forever, it took one man to convince a country that they were superior; it took one man to take the lives of over 6million Jews, and it took one man to start one war, which would be the death of over 56million people. By Peter Lam By Peter Lam ...read more.