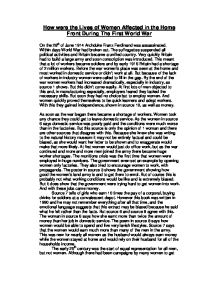 How were the Lives of Women Affected in the Home Front During The First World War On the 28th of June 1914 Archduke Franz Ferdinand was assassinated. Within days World War had broken out. The suffragettes suspended all political activities and Britain became a unified country. Very quickly Britain had to build a large army and soon conscription was introduced. This meant that a lot of workers became soldiers and by early 1916 Britain had a shortage of 2 million workers. Before the war women's place was seen at the home and most worked in domestic service or didn't work at all. But because of the lack of workers in industry women were called to fill in the gap. By the end of the war women workers had increased dramatically, especially in industry, as source 1 shows. But this didn't come easily. At first lots of men objected to this and, in manufacturing especially, employers feared they lacked the necessary skills. But soon they had no choice but to employ women. And women quickly proved themselves to be quick learners and adept workers. With this they gained independence, shown in source 10, as well as money. ...read more.

Source 7 says that the women would earn much more than many of the men in the army. This was new for nearly all women as the husband would always earn money while the women stayed at home and would rely on their husband for all of the households income. The early 20th century was the start of equal representation for all men, but not women. Although there had been campaigns by many women to get the vote it wasn't until the Great War that people started to take women seriously, and as the war dragged on and women's role increased both women and men were starting to think that they deserved the vote. They had proven themselves equal to men in almost everyway. Former British PM H. Asquith's speech in source 9 shows how men changed there minds during the war. Before the war Asquith was against women gaining the vote but his change of mind shows how much women had done during the war. He is admitting he is wrong so he may not be lying although he could be saying it to gain popularity by appealing to women. Even if it isn't what he truly thinks it does represent the shift of opinion about women. However not all these changes came easily. ...read more.

This source is very reliable because it is a secondary source with the benefit of hindsight. Although during the war women had been given jobs they all had give them back and return to life as normal. But many didn't want to. In 4 years women had transformed themselves from housewives and maids to factory workers and bus conductresses. They had proven themselves to be equal to men in every single way. They had been given jobs which before 1914 were men only jobs. They gained more money and with that independence from men. And many women even gained political representation. The First World War had raised respect for women and changed the lives of many women. But when the war finished women were expected to return to normal life before the war. They were pressured into giving up their jobs but then slandered when they were living off benefits. It is fair to say that many of these changes were short term but there were some long term changes. And these led to votes for all adult Britons; men and women. Things may have taken a step back after the war but the war had been the first big steps forward for women's rights. By Sean Coffey Word count: 1,287 ...read more.