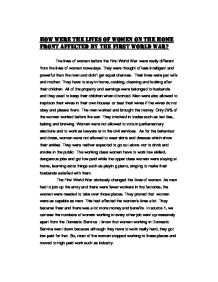 How were the lives of women on the home front affected by the First World War?

How were the lives of women on the home front affected by the First World War? The lives of women before the First World War were really different from the lives of women nowadays. They were thought of less intelligent and powerful than the men and didn't get equal chances. Their lives were just wife and mother. They have to stay in home, cooking, cleaning and looking after their children. All of the property and earnings were belonged to husbands and they used to keep their children when divorced. Men were also allowed to imprison their wives in their own houses or beat their wives if the wives do not obey and please them. The men worked and brought the money. Only 29% of the women worked before the war. They involved in trades such as textiles, baking and brewing. Women were not allowed to vote in parliamentary elections and to work as lawyers or in the civil services. As for the behaviour and dress, women were not allowed to wear skirts and dresses which show their ankles. They were neither expected to go out alone nor to drink and smoke in the public. The working class women have to work low skilled, dangerous jobs and got low paid while the upper class women were staying at home, learning extra things such as playing piano, singing to make their husbands satisfied with them. ...read more.

Women earned more money and enjoyed more freedom during the WW1. Before the war, women had no freedom. They were not allowed to smoke, drink or go out with men. But during and after the war, they became more fashionable and freer. They also got good paid jobs. They wore shorter skirts, trousers and had their hair short cut. Single women were able to socialise, including drinking and smoking. Source 7 and 10 mentioned this. Source 7 is quoted by Rifleman H.V. Shawyer in a book, Voices and images of the Great War. In this source, he tells about his experience with a factory girl in a pub who paid a drink for him. In this source, he used words like "good company" to tell that the girls enjoyed themselves. This also means that the factory girls can spend money for what they want. This was written in 1990 therefore, it is a secondary source but as it was a quote from a book of rifleman, we can know that it is based on primary source. He would have no reason to lie. So, I think this source is reliable about telling the changes lives of women. Source10 is a photograph showing young women smoking and drinking in a restaurant in 1920, after the war. There on the table is a sign requesting not to smoke but the women were smoking. ...read more.

This unknown author wanted the women to give up their jobs for the men who had came back from fighting. But the women wanted to keep their jobs. They undertook the jobs which had been for the men. I think this source cannot be a reliable source because the author was unknown and as it was published in popular magazine, it will only to entertain people to get money. At the end of the World War 1, the lives of women were changed in British society. Despite the fact that their lower position improved, they didn't get the chance to achieve equality with the men. The reason is only women over 30 got the vote when the vote was given to men over 21. This upset the women between eighteen and thirty and as I have mentioned before, some women were forced to go back to their old jobs when the men were back. They were not prepared to have their freedom taken back from them. Overall, the lives of women were changed a lot as a result of WW1. Their lives were not only housewives and mother anymore. They got more freedom and money. They can go out whenever they wanted and wear anything they wanted. Moreover, the war made the women more equal to men than before in some places. Many changes continued to improve till now. Finally, the lives of women on the home front were well affected by the First World War. ?? ?? ?? ?? ...read more.