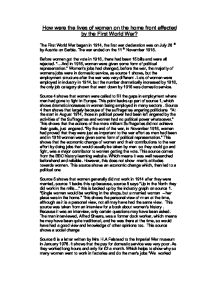 How were the lives of women on the home front affected by the First World War?

How were the lives of women on the home front affected by the First World War? The First World War began in 1914, the first war declaration was on July 28th by Austria on Serbia. The war ended on the 11th November 1918. Before women got the vote in 1918, there had been 15 bills and were all rejected. "...And in 1918, women were given some form of political representation." Women's jobs had changed, before the war, the majority of womens jobs were in domestic service, as source 1 shows, but the employment structure after the war was very different. Lots of women were employed in industry in 1914, but the number dramatically increased by 1918, the only job category shown that went down by 1918 was domestic service. Source 4 shows that women were called to fill the gaps in employment where men had gone to fight in Europe. This point backs up part of source 1, which shows dramatic increases in women being employed in many sectors. Source 4 then shows that largely because of the suffragettes angering politicians "At the start in August 1914, those in political power had been left angered by the activities of the Suffragettes and women had no political power whatsoever." ...read more.

This shows that the women were much better off working in the factories, though 10 times may have been an exaggeration. Source 6 shows an economic change, but can also be related to as a social change. Source 13 is an extract of commentary from the BBC TV series "Out of the Doll's House." Which was a documentary that looked at women in the 20th century. It states that the government and the press exaggerated the level at which women replaced men at jobs, as many professions still remained closed to women "...both the government and the press tended, for propaganda reasons, to exaggerate the extent to which women took over men's jobs." Also, that women workers were treated worse than men in the workplace. It also states that women's pay, although higher than they are used to, remained lower than that of men who worked in the same jobs. "...routinely portrayed as 'high' in the wartime press, remained significantly lower than those of their male counterparts." It also then states that, women saw it as liberating because it got them out of unpopular and very poorly paid jobs like domestic service. This source is useful because it shows the downsides of women doing men's jobs for them, but from a balanced viewpoint. ...read more.

Newspapers that once called them heroines were calling them parasites. This source was from 1994, and so is secondary, although wasn't there at the time, would have been thoroughly researched, and was also written by a historian. The source does not contain any personal opinions, so would have little exaggeration. The key changes during this period was the right to vote, and this was helped by the way they helped the war effort during this time. Overall, I think there was change to Women's lives after and during the war, the main changed were political, as women got the right to vote, however, as a lot of women after the war had to leave their jobs, as source 14 shows. The social change by the end was not great, as well as the economic, source 6 and 11 contradict one another as to their pay, the only thing that can be shown by this is that there may have been a wide range of pay for different jobs. However, economic and social had changes as many women did not want to go back into domestic service. A lot of men also did not like women taking men's jobs, which source 12 shows. This is why I think the real changed were political ones, the social and economic were not greatly changed by the end of the war. ...read more.