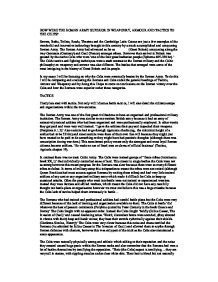 How Were The Roman Army Superior In Weaponry, Armour And Tactics To The Celts?

HOW WERE THE ROMAN ARMY SUPERIOR IN WEAPONRY, ARMOUR AND TACTICS TO THE CELTS? Sewers, Baths, Toilets, Roads, Theatres and the Cambridge Latin Course are just a few examples of the wonderful and innovative technology brought to this country by a much accomplished and conquering Roman Army. The Roman Army had advanced as far as (Great Britain) conquering along the way Germania (Germany) and Gaul (France) amongst others. However their arrival in Britain was greeted by the native Celts who were 'one of the four great barbarian people (Ephorus 405-330 bc).' The Celtic tactics and fighting techniques were a stark contrast to the Roman military and the Celtic philosophy on weaponry and armour was also different. The battles that emerged were some of the most intriguing in the history of Great Britain and its people. In my essay I will be focusing on why the Celts were eventually beaten by the Roman Army. To do this I will be comparing and evaluating the Romans and Celts under the general headings of Tactics, Armour and Weaponry and by doing this I hope to come to conclusions on the Roman victory over the Celts and how the Romans were superior under those categories. TACTICS Firstly lets start with tactics. Not only will I discuss battle tactics, I will also detail the military setups and organizations within the two societies. The Roman Army was one of the first great civilizations to have an organized and professional military institution. The Roman Army was similar to our modern British army because it had an army of extensively trained soldiers who had been organized and were professionally employed. ...read more.

Roman soldiers had three main weapons. A shield, a sword and two throwing javelins. The Roman shield (Scuta) were very large and covered a lot of the Roman soldiers' body. The shields were actually quite light to enable the soldiers to manouvere easily and to wield their other weapons easily. (as can be seen in the picture) The Roman sword (Gladius) was quite small and was carried on the soldiers' belts to free up their hands to carry the javelins. The sword was Individually designed for each soldier to carry which meant it was very comfortable and enabled the soldiers to use it very quickly in a stabbing motion in the midst of battle. (as can be seen in the picture) The Roman javelin (Pilum) was the biggest and most effective Roman weapon. It was over seven feet long and had a sharpened metal point. When thrown once the Pilum came into contact with a Celtic shield it would Stick and brake at the end. this rendered the Celtic shield useless and meant the Pilum couldn't be returned. Once the Celts threw their shield away they were exposed because of their lack of body armour (see Armour section) If the Pilum came into contact with a Celt it would only take the javelin to be 2 inches inside a man to kill him. (as can be seen in the picture) In comparison the lack of resources and technology available to the Celts meant they only carried a shield and a spear. ...read more.

while in contrast the Celts could only afford swords for wealthy citizens because they were seperate and individual tribes governing a small area and this difference was telling when on the battlefield the Celts were left wielding sub-par weapons because they had never been up against opposition as advanced as Romans while the Romans had years and years to perfect weaponry during their conquest of foreign lands. The Romans had strong armour that enabled them to take some blows from the Celts comfortably before retaliating. However the fabled Celtic bravery was evident as they charged into battle with no armour and though this impressed Romans their lack of armour meant any strong contact the Romans made with their good quality weapons would have caused severe injury or death while Celts would find it very difficult to penetrate Roman armour that was of very high standard (and much superior than that of the Celts) with low quality weapons and this ultimately was the reason for Roman victory. When it came to weaponry and armour the Romans excelled through advanced technology that had been developed and changed from years of battles with people from other countries. The Romans resources and technology was at the end of the day the biggest reason they were victorious and it was in weaponry and armour that the Romans were vastly advanced than Celts however in tactical strength the Romans had met their match against a barbarians who wether by luck or skill had managed to terrify the Romans and win the mental side of a battle because of their bravery and terrifiying barbarian qualities. ...read more.