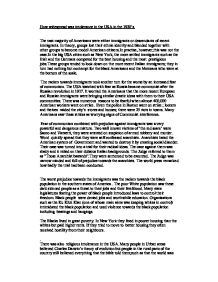 How widespread was intolerance in the USA in the 1920's.

How widespread was intolerance in the USA in the 1920's. The vast majority of Americans were either immigrants or descendants of recent immigrants. In theory, groups lost their ethnic identity and blended together with other groups to become model American citizens.In practise, however,this was not the case.In the big USA cities such as New York, the more settled immigrants such as the Irish and the Germans competed for the best housing and the most prestigious jobs.These groups tended to look down on the more recent Italian immigrants; they in turn had nothing but contempt for the black Americans and the Mexicans who were at the bottom of the scale. The racism towards immigrants took another turn for the worse by an increased fear of communism. ...read more.

Word quickly spread that they were self confessed anarchists. Anarchists hated the American system of Government and wanted to destroy it by creating social disorder. Their case was turned into a trial for their radical ideas. The case against them was shaky and it relied on their dubious Italian backgrounds. The Judge referred to them as "Those Anarchist bastards".They were sentenced to be executed. The Judge was narrow minded and full of prejudice towards the anarchists. The world press remarked how badly the trial had been conducted. The worst prejudice towards the immigrants was the racism towards the black population in the southern states of America . The poor White population saw these dark skinned people as a threat to their jobs and their livelihood. ...read more.

but in the 1920's a man called William Bryan managed to pass a law that children must be taught the story of the bible. However, biology teacher John Scopes broke this law so that he could bring his argument to court. Many of the best lawyers in the country were called upon to resolve the age old argument of science v religion. This captured public attention throughout the world. In the end Religion lost and its supporters were subjected to great mockery in the press. So as one can see a lot of things changed in the USA in the 1920's. There was a great deal of intolerance all over the USA but in the end this often ridiculed and intolerant society eventually overcame its predjudices and moved into the modern era . ...read more.