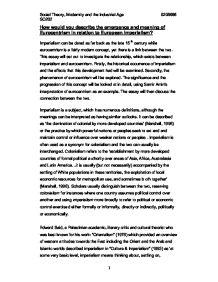 How would you describe the emergence and meaning of Eurocentrism in relation to European imperialism?

How would you describe the emergence and meaning of Eurocentrism in relation to European imperialism? Imperialism can be dated as far back as the late 15th century while eurocentrism is a fairly modern concept, yet there is a link between the two. This essay will set out to investigate the relationship, which exists between imperialism and eurocentrism. Firstly, the historical occurrence of imperialism and the effects that this development had will be examined. Secondly, the phenomenon of eurocentrism will be explored. The significance and the progression of this concept will be looked at in detail, using Samir Amin's interpretation of eurocentrism as an example. The essay will then discuss the connection between the two. Imperialism is a subject, which has numerous definitions, although the meanings can be interpreted as having similar outlooks. It can be described as 'the domination of colonial by more developed countries' (Marshall, 1998) or the practice by which powerful nations or peoples seek to extend and maintain control or influence over weaker nations or peoples. Imperialism is often used as a synonym for colonialism and the two can usually be interchanged. Colonialism refers to the 'establishment by more developed countries of formal political authority over areas of Asia, Africa, Australasia and Latin America...it is usually (but not necessarily) accompanied by the settling of White populations in these territories, the exploitation of local economic resources for metropolitan use, and sometimes both together' (Marshall, 1998). Scholars usually distinguish between the two, reserving colonialism for instances where one country assumes political control over another and using imperialism more broadly to refer to political or economic control exercised either formally or informally, directly or indirectly, politically or economically. ...read more.

An army and a centralised bureaucracy were maintained by the Company in order to rule their colonial subjects. This infrastructure required the company to tax their subjects heavily. As the colonial cities grew and Indian migrants moved in from the country, they were forced to dwell in cramped and crowded quarters known as the "black towns" while Europeans lived in the luxurious enclaves which surrounded the Company's fort. India was expected to serve the interests of a rapidly industrialising Britain and became an essential market for British textiles while exporting raw cotton. As well as altering the Indian economy, the colonial powers were also determined to imprint their own culture and values onto the Indian society. An employee of the Company criticised the backwardness of indigenous social practices and cultural traditions while an official dealing in education policies declared that a single shelf in any Western library would consist of a greater amount of knowledge than the Persian and Sanskrit texts. Muslim social practices were also to be altered through the legislation and the introduction of European education. An example of this included the proposed banning of sati - a practice entailing the burning of a woman on the funeral pyre of her dead husband. These proposed changes and legislations aimed to result in a 'new and improved' Indian class, which would be Indian in colour and blood yet, hold English tastes and culture. The paragraphs above have given concrete examples of imperialism in the two stages which have been detailed, but the question still remains: what was the ideologies behind this practice? ...read more.

No doubt this led Europeans for centuries to absorb unconsciously from their atlases the idea that this was somehow the natural order of things...Mercator (a cartographer) helped his own civilisation to take what is now called a 'Eurocentric' view of the world' (Hall, 1993, 326). Eurocentrism existed in the times of imperialism, although no one had given this ideology a name. Samir Amin discusses the emergence of eurocentrism as appearing in the same period of the Renaissance, this was a time when Europeans developed superiority and capitalism began to develop. The capitalist world systems enabled Europe to act on their belief that they could conquer empires and impose their global vision, which was supposedly universal (Amin, 1988, p73). Sayyid claims that even with the ending of empire, the logic of eurocentrism is the invisible empire, which keeps the 'Rest' in its place. It could be argued that structures such as the World Bank and the IMF are part of this invisible empire. Western power over the 'other' lies in these configurations. In conclusion, imperialism was a major European configuration, which permeated most of the globe. Europe's culture and ideas were taken on in their colonisations although this was not welcome in many cases. Eurocentrism remains a legacy in this period. To describe the emergence and meaning of eurocentrism in relation to imperialism would be to describe it as an ongoing chapter of imperialism. Although imperialism has been formally ended, eurocentrism remains to serve as its keeper. Ideas of superiority, 'otherness' and stereotypical views of the world outside the West continue to act as an assumed universal knowledge just as imperialism purported to do. So through the ideology of eurocentrism imperialism still lingers. Social Theory, Modernity and the Industrial Age 0205866 SO202 1 ...read more.