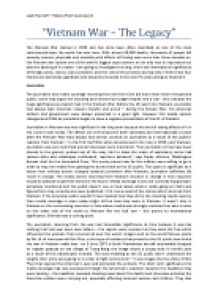 I think that the four most significant themes in the Vietnam War were protest movements, foreign policy, tactics and war journalism

﻿Leah Foxcroft ? History Pilot Coursework ?Vietnam War ? The Legacy? ________________ The Vietnam War started in 1955 and has since been often described as one of the most controversial wars the world has ever seen. With almost 60,000 deaths, thousands of people left severely scarred, physically and mentally with affects still being seen more than three decades on, the Vietnam war caused one of the world?s biggest super powers to not only lose its reputation but also the backing of its nation. I am going to investigate the long, short and international significance of foreign policy, tactics, war journalism, and the role of the protests and say why I think these four themes are extremely significant and should be included in the new TV series airing on Channel 4. Journalism The journalism and media coverage returning from the front line did more than inform the general public, some may argue the shocking and honest front pages helped end a war - this indicates the huge significance journalism had in the Vietnam War. Before the US went into Vietnam, journalists had always kept American viewers hopeful and proud ? during the Korean War, the American soldiers and government were always presented in a good light. However this media opinion changed post 1955 as journalists began to show a negative presentation of the US in Vietnam. Journalism in Vietnam was very significant in the long term because we are still seeing affects of it in the current wars today. The affects are still being seen both nationally and internationally as wars after the Vietnam War have always had stricter controls on journalism as a result of the public?s reaction from Vietnam ? in the first Gulf War when America went into Iraq in 1990, post Vietnam, journalism was very restricted and all interviews were monitored. "Our journalists in Iraq have been shoved to the ground, pushed out of the way, told to leave the scene of explosions; we've had camera disks and videotapes confiscated, reporters detained," says Sandy Johnson, Washington Bureau chief for the Associated Press. ...read more.

This change in the way the Vietnamese fought had short term significance as it helped them to fight back more successfully against the Americans. This shocked the American troops as they had to put up a very strong fight against a non experienced and ill equipped army ? this wasn?t something they were familiar with. The Vietcong?s guerrilla warfare was significant as it was resonant in making it very difficult for the US to win their fight against communism. Had the Vietcong given the American?s what they wanted, which was a traditional war made up of gruesome battles, then there is it is possible that America would have won and regained influence in Vietnam. Another factor which proves tactic?s long term significance is that almost a decade after the war had ended the veterans sued the American defoliant manufacturers and this was settled out of court in 1984 by the payment of $180 million ? this shows that almost ten years after the war the US were still having to put right the mistakes they had made in Vietnam. The weapons used by both sides were resonant as they had long term lasting effects on the rest of the world, tactics should definitely be included as one of the themes covered in the new TV series as weapons and tactics changed how the war was fought and played a huge part in the changing the world?s opinion of America?s years spent in Vietnam. The long term affect of the tactics used is that they were remarkable and shocking ? the US tactics have never been used in wars since and this shows that America learnt that the tactics were wrong to use. The tactics also had long term significance because of the amount of people still suffering from illnesses that?s symptoms can be traced straight back to agent orange ? 3 million people are sick and dying from birth defects, cancer and other illnesses that they wouldn?t be suffering from had America not dropped millions of gallons of chemical liquids in Vietnam. ...read more.

because of all the things they contributing towards changing people?s opinions all over the world both in the long term and the short term. Foreign policy should be included because of the massive long term significance it has had ? because of how Vietnam changed America?s foreign policy, the US have never been into another war alone and without the backing of another nation - this is a huge change and without the Vietnam war to knock America?s confidence it was only inevitable that something of the same scale would have happened at a later date. Tactics should also be included because they were resonant; because of the tactics used, the media thrived in sending news of Vietnam back to the US and because of the media stories published more and more protests happened; this shows that the tactics used to fight and eventually end the war had extreme significance. Tactics are also significant because of how many lives were lost and also how many people are currently still suffering because of the chemicals used; due to America only recently paying out millions of compensation to Vietnam it shows it is still something both countries are thinking about. Protest movements should be included as it is an unusual thing to link with a war of Vietnam?s kind ? masses of people do not normally come together to fight against the war US are fighting in; protest movements should be looked at in the TV series because of their remarkable international significance. Lastly, media coverage should be included because it could be argued that the stories sent back to the US helped end the war. The four themes that I have chosen all changed different things not just in America but some all over the world ? this is why I think they are the main factors that people needs to know about because they will have affected how things in the public?s society are today, and should therefore be included in the TV series. ...read more.