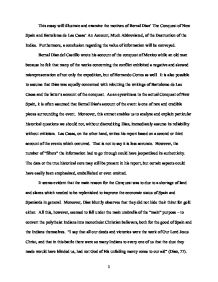 Illustrate and examine the motives of Bernal Diaz' The Conquest of New Spain and Bartolome de Las Casas' An Account, Much Abbreviated, of the Destruction of the Indies.

This essay will illustrate and examine the motives of Bernal Diaz' The Conquest of New Spain and Bartolome de Las Casas' An Account, Much Abbreviated, of the Destruction of the Indies. Furthermore, a conclusion regarding the value of information will be conveyed. Bernal Diaz del Castillo wrote his account of the conquest of Mexico while an old man because he felt that many of the works concerning the conflict exhibited a negative and skewed misrepresentation of not only the expedition, but of Hernando Cortes as well. It is also possible to assume that Diaz was equally concerned with rebutting the writings of Bartolome de Las Casas and the latter's account of the conquest. As an eyewitness to the actual Conquest of New Spain, it is often assumed that Bernal Diaz's account of the event is one of rare and credible pieces surrounding the event. Moreover, this extract enables us to analyze and explain particular historical questions we should not, without discrediting Diaz, immediately assume its reliability without criticism. Las Casas, on the other hand, writes his report based on a second or third account of the events which occurred. That is not to say it is less accurate. However, the number of "filters" the information had to go through could have jeopardized its authenticity. ...read more.

A major theme develops throughout his account - the use of manipulation. Diaz reveals Cortes' heroism and leadership and both these qualities flourished out of his main objective. This objective was to manipulate Indians and rule over their large nation by eliminating their head of state, Montezuma. Bartolome de Las Casas' abbreviated account provides the reader of all the atrocities committed by the Spaniards to the innocent Indians. In descriptive detail, he outlines how thousands were not only treated as animals and used for slaves, but also how the women were treated as sexual vessels. Killings were deemed as a necessary evil and thousands (possibly embellished) executed or mutilated without the slightest bit of remorse. Although his depiction of the events may be skewed and filtered from a second or third-hand account, one theme emerges from his writings - a theme of fear. Las Casas does mention how the main reason or purpose for the expedition was Christianize the polytheists, their savage treatment and killing of the Indians truly exhibited how fear was their main tool to accomplish this task. These killings were aided by the use of guns and horses, but most importantly, as allowing the Indians to interpret the Spaniards as devils or gods that were part of their polytheistic religion. An example of how Diaz' theme of manipulation and Las Casas' theme of fear becomes translucent is when the Spaniards arrive at Cholula, a state of the Aztecs. ...read more.

Bartolome de Las Casas is not excluded from this bias. He is not writing from first-hand experience. Moreover, his heavily Christian views provide a drastically skewed account of the Conquest. It is much harder to find the true, historical core through his many filters. When it is found, it is very succinct. Lastly, both writers are men. Their prejudice and unfairness toward focusing on the male-centered activities and events leave the historian with little information about roles and responsibilities woman and children had during the transpiring events. After reading and comparing the Conquest according to Bernal Diaz and Bartolome de Las Casas, the amateur historian should have attained a few important lessons. One must establish who is writing the account and where the information was ascertained - establishing whether it was a first hand account or passed on from explorers or missionaries are vitally important. The audience and purpose of the historian is also a key factor in studying historical articles. By knowing the historians purpose and what s/he hopes to accomplish helps to explain why certain information may be excluded, or even embellished. Multiple sources are another fundamental dynamic. By collaborating different accounts, a true and pure historical core and emerge from varying reports. The culture and religious identity of the historian also informs the reader of certain biases that may exist, since the historian may force contemporary or extraneous ideologies into their account. ...read more.