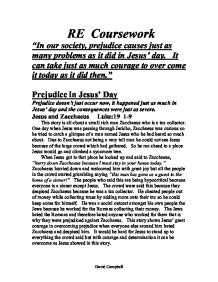 &quot;In our society, prejudice causes just as many problems as it did in Jesus' day. It can take just as much courage to over come it today as it did then.&quot;

RE Coursework "In our society, prejudice causes just as many problems as it did in Jesus' day. It can take just as much courage to over come it today as it did then." Prejudice in Jesus' Day Prejudice doesn't just occur now, it happened just as much in Jesus' day and the consequences were just as severe. Jesus and Zacchaeus Luke:19 1-9 This story is all about a small rich man Zacchaeus who is a tax collector. One day when Jesus was passing through Jericho, Zacchaeus was curious so he tried to catch a glimpse of a man named Jesus who he had heard so much about. Due to Zacchaeus not being a very tall man he could not see Jesus because of the large crowd which had gathered. So he ran ahead to a place Jesus would go and climbed a sycamore tree. When Jesus got to that place he looked up and said to Zacchaeus, "hurry down Zacchaeus because I must stay in your house today." Zacchaeus hurried down and welcomed him with great joy but all the people in the crowd started grumbling saying "this man has gone as a guest to the home of a sinner!" ...read more.

This shows us that people are very stereotypical and as soon as they see a homeless person they automatically think that they are an alcoholic. A fact that I found out where that 15 million working days are lost a year due to heavy drinking, just think about how much work could have been done during this time. I think a good idea would be to ban alcohol because it would save lives and also the country would be in better shape instead of people staying off on sick leave. Many people are also addicted to drugs such as heroine, cocaine, LSD and cannabis which are all highly addictive and these are the drugs which people think of when they mention the word. There are other types of drugs like solvents(glues, petrol) which are sniffed to inhale the fumes to try and get high and have a quick buzz. With almost all drugs the good effects only last for a short while and after you can feel worse than when they first started, so to feel better they keep on taking more and more until everything they do is geared to drugs. Some people to keep their addiction going they have to resort to stealing for money. ...read more.

Everyone knows his "I have a dream" speech and in 1964 he won the Nobel Peace Prize. King continued with his work during which he suffered near exhaustion from stress. His speeches increasingly alluded to his possible death. For example on April 3 1968 he spoke about "been to the mountain top and seen the Promised Land". The following day King was shot and killed in Memphis, Tennessee. Some 100,000 people attended the funeral and the person that killed him was sentenced to 99 years in prison. Overall what Martin did was very brave because most white men at that time would have been in some way racist. There were many people who at the time would have thought what Martin was doing was illegal. Also it would have taken extreme bravery to actually do that because at the time what he done would have shocked most people. He showed real courage when he carried on after the death threats and especially after they actually attempted to carry out these. In some ways he was pre-judged in similar ways to Jesus because most people wanted to bring him down and in the end they were both brutally murdered but what they did helped so many others. ...read more.