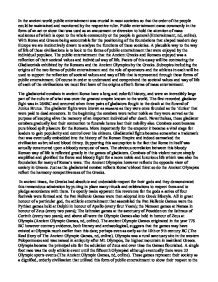 Olympos, the highest mountain in mainland Greece. Olympia became the principal site for the adulation of Zeus and over time the Games flourished. A single foot race was the only athletic event until the fifteenth Olympiad although eventually there were 23 Olympic sports events (The Ancient Olympic Games, nd, online). These games represent their society as a dignified, orderly civilization that utilized this form of public entertainment to show their respect to the gods and skill and determination as athletes. Public entertainment of this kind seems very honourable and gentle in comparison to Roman entertainment that forced brutality and epitomized their lust for blood and gore. With such a tolerance for violence embedded in the Romans which was attributable to the military essence that encircled the Empire, the gore of gladiatorials had to be extreme in order to surpass the easiness of the Roman spectators' view of violence. This was most commonly held in display at the Colosseum which was built by members of the Flavian dynasty and was finished in 80 AD after nine years of construction. The aura of death was strong in the amphitheater which could hold 50 000 spectators. This was especially so when spectators played the role of determining whether or not the losing gladiator would die. ...read more.

Each competitor had to swear an oath that he was a free-born Greek who had committed no sacrilege against the gods. Ancient athletes competed as individuals, not on behalf of teams; this is a reflection of the emphasis on individual athletic accomplishment through public competition which was a prominent connection to the age old Greek ideal of excellence. Athletes competed nude although they originally wore shorts but, according to one ancient writer, Pausanias, "A competitor deliberately lost his shorts so that he could run more freely during the race in 720 BC, and clothing was then abolished" (Roman Gladiatorial Games, 2002, online). In conclusion gladiatorial conquests were merely a form of public entertainment that gave the citizens a sense of power and emperor a sense of control. Note these two feelings; power and control reflect Rome's unrelenting desire to dominate the Mediterranean region and their violent fight in gaining that. These games that the Romans enjoyed so much are unmistakably a mirror image of a society in chaos. The Ancient Olympic Games however reflect a more respectful society in harmony. When the two civilisations are placed side by side the hidden connotation of the age old saying good verses evil is evidently apparent. Roman public entertainment of gladiatorials was evil and Greece's ancient Olympic entertainment was of high morale. Proved in this essay is that the public entertainment enjoyed by these two civilisations clearly reflects their societal values and individual way of life. ...read more.