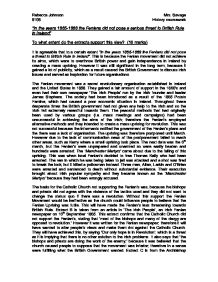 &quot;In the years 1865-1868 the Fenians did not pose a serious threat to British Rule in Ireland&quot; To what extent do the extracts support this view?

"In the years 1865-1868 the Fenians did not pose a serious threat to British Rule in Ireland" To what extent do the extracts support this view? (16 marks) It is agreeable that to a certain extent "in the years 1865-1868 the Fenians did not pose a threat to British Rule in Ireland". This is because the Fenian movement did not achieve its aims, which were to overthrow British power and gain independence in Ireland by creating a mass uprising. However it was still significant in the long term, because it gained a lot of publicity, which as a result caused the British Government to discuss Irish issues and served as inspiration for future organisations. The Fenian movement was a secret revolutionary organisation established in Ireland and the United States in 1858. They gained a fair amount of support in the 1860's and even had their own newspaper 'The Irish People' run by the Irish founder and leader James Stephens. The society had been introduced as a result of the 1865 Potato Famine, which had caused a poor economic situation in Ireland. Throughout these desperate times the British government had not given any help to the Irish and so the Irish felt extremely resentful towards them. ...read more.

'inducing its dupes to engage in breaches of the law, to disturb the minds of other and to bring public vengeance on themselves'. The extract states that the movement 'had great influence in bringing about mischief', meaning that the Fenian's created trouble and did not produce any significant changes in Ireland. However it does imply that they did threaten British Rule to a certain extent, in view of the fact that the Catholic Church was actively trying to prevent the Fenian Uprising from occurring. This was due to the fact that they did not agree with the violent methods used by the Fenian's and so they influenced people to oppose it by making it seem unfavourable and appointed informants to notify the government of all of the Fenian's plans. This is confirmed when the Archbishop pronounces that the job of the bishops is 'to prevent the spread of secret societies and to check everything revolutionary'. The middle class did not support the Fenian's because there was a strong belief of Laissez-faire or 'Leave it alone', which meant that they did not want to be involved as they did not have any interest in the matter and did not want to finance the organisation and buy weapons. ...read more.

An example of one of these groups was the Irish Republican Army, which became responsible for the violent bombings of the city of Manchester and the Grand Hotel in Brighton. The main impact the movement had was that it still managed to get William Gladstone and the British Government to recognise the problems within Ireland. Whereas before it was a natural and acceptable state of affairs to ignore problems in Ireland, after the Fenian movement they had no choice to give the Irish justice in order to be at peace with each other. To conclude it can be seen that the Fenian movement did not pose a major threat to British Rule between the years 1865-1868. This is because it failed considerably in achieving the aims, mainly due to the lack of support from the middle classes and the Catholic Church. Extracts A, B, C and D provide evidence to support this view, but the extracts would have to be compared with other sources of evidence in order to ensure that the views given are not biased. Extract E says that despite their failure they did become legendary, as they managed to get William Gladstone and the British Government to recognize the problems within Ireland and inspired other groups, such as, the I.R.A to campaign further. ?? ?? ?? ?? Rebecca Johnson Mrs. Savage 8108 History coursework ...read more.