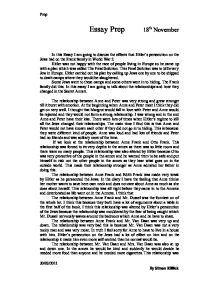 In this Essay I am going to discuss the effects that Hitlers persecution on the Jews had on the Frank family in World War 2.

In this Essay I am going to discuss the effects that Hitler’s persecution on the Jews had on the Frank family in World War 2.

Hitler was not happy with the race of people living in Europe so he came up with a plan which was called The Final Solution. This Final Solution was to kill every Jew in Europe. Hitler carried out his plan by calling up Jews one by one to be shipped to death camps where they would be slaughtered.

Some Jews went to these camps and some others went in to hiding. The Frank family did this. In this essay I am going to talk about the relationships and how they changed in the Secret Annex.

The relationship between Anne and Peter was very strong and grew stronger till it burst with emotion. At the beginning when Anne and Peter meet I think they did get on very well. I thought that Margrot would fall in love with Peter and Anne would be rejected and they would not form a strong relationship. I was wrong and in the end Anne and Peter have their kiss. There were lots of times when Hitler’s regime to kill all the Jews changed their relationships. The main time I find this is that Anne and Peter would not have known each other if they did not go in to hiding. This is because they were different kind of people. Anne was loud and had lots of friends and Peter had no friends and was solitary most of the time.

The relationship between Anne Frank and Edith Frank was made very weak by Hitler as he persecuted the Jews. In the diary I have the feeling that Anne thinks her mother wants to save here own neck and does not care about Anne as much as she does about herself. This relationship was all right before they came in to the Annexe and deteriorated as life went on in the Annexe. I think that

The relationship between Mr. Van Daan and Mrs. Van Daan was also an up and down one. In the annex he would be kind and suddenly he would decide he needed more food than anyone and he needed more cigarettes. This relationship was affected by Hitler’s persecution on the Jews. This was affected because of Mr. Van Daan being nervous of the Germans finding them that he became obsessed with it and he was very unkind towards his wife and sometimes also Peter their son.

The relationship between Mr. Van Daan and Otto Frank was not very good. These two people were almost opposite to each other. This meant that Otto frank cared about other people and he did not. The persecution of the Jews changed their relationship a lot because, again Mr. Van Daan was so petrified of the thought that they might be caught that it was unfair to Otto. Otto did not care and sorted out the situation, with in a way, pride.