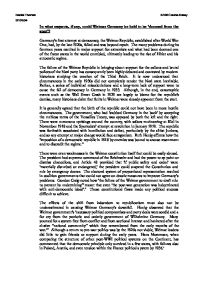 In what respects, if any, could Weimar Germany be held to be 'doomed from the start'?

In what respects, if any, could Weimar Germany be held to be 'doomed from the start'? Germany's first attempt at democracy, the Weimar Republic, established after World War One, had, by the late 1920s, failed and was beyond repair. The many problems during its fourteen years resulted in major support for extremists and what had been deemed one of the freest states in the world crumbled, ultimately leading to the rise of Hitler and his autocratic regime. The failure of the Weimar Republic in bringing about support for the callous and brutal polices of the Nazi party has consequently been highly debated and contested by modern historians studying the creation of the Third Reich. It is now understood that circumstances in the early 1930s did not completely render the Nazi state inevitable. Rather, a series of individual miscalculations and a long-term lack of support were to cause the fall of democracy in Germany in 1933. Although, in the end, catastrophic events such as the Wall Street Crash in 1929 are largely to blame for the republic's demise, many historians claim that faults in Weimar were already apparent from the start. ...read more.

Henig observed that the Weimar government's 'necessary political compromises and party deals were sordid and a far cry from the patriotic and orderly government of Wilhelmine Germany. Many yearned for a system free from conflict and from sectional interest and hankered after the elusive "national community" which they remembered from the early months of the war.iv' Although a return to pre-war politics was by the 1920s not viable, Weimar leaders did little to gain friends or support during the early years. Hans Mommsen, when comparing the structure of other post-WWI political systems on the Continent, has commented that the democratic principle only survived in a few states, with failures also in Poland, Austria, and even tension within the France political system by 1936.v Therefore there were inherent weaknesses within Weimar Germany, which, in retrospect, have caused some historians to see its failure as inevitable. Support for the republic was certainly weak, and there were indeed political failings that made any immediate solutions to the country's increasing economic and social crises almost impossible. ...read more.

The end of Weimar Germany was nigh. Chancellor Br�ning's decision to rule by decree in September 1930 to restore authority and prevent further radicalisation was, according to Hans Mommsen, 'doomed because they ignored the very conditions of modern industrial society and pursued an illusory dream of returning to anti-urban social structures.vi' With the rapidly increasing resentment, the fate Weimar Republic had been sealed. By 1932, only 'a choice between authoritarian and fascist dictatorship existed.vii' It therefore remains that, whilst there were obvious intrinsic weaknesses within the Weimar Republic, the government managed to survive until an unfortunate and catastrophic series of events in the late 1920s. To conclude that Weimar Germany was 'doomed from the start,' does not take into consideration the measures taken throughout the 1920s to solve long-term social, political, and economic problems. As Ruth Henig highlights, 'Weimar Germany was a society in transition, experiencing the pressures of modernisation and of industrialisation.viii' Any attempt at changing the deep-rooted nature of Germany's political and social structure would be difficult, but failure was not inevitable. i Ruth Henig, The Weimar Republic 1919-1933 (London, 1998) ii+iii Gordon A. ...read more.