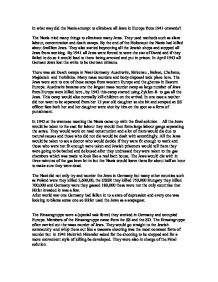 In what way did the Nazis attempt to eliminate all Jews in Europe from 1941 onwards?

The Nazis tried many things to eliminate many Jews. They used methods such as slave labour, concentration and death camps. By the end of the Holocaust the Nazis had killed about 6million Jews. They also started boycotting all the Jewish shops and stopped all Jews from working. By 1941 all Jews were forced to were the star of David and if they failed to do so it would lead to them  being arrested and put in prison. In April 1943 all German Jews lost the write to be German citizens.

There was six Death camps in Nazi Germany Auschwitz, Birkenau , Belzec, Chelmno, Majdanek  and Terblinka. Many mass murders and body disposal took place here. The Jews were sent to one of these camps from western Europe and the ghettos in Eastern Europe. Auschwitz became one the largest mass murder camp as large number of Jews from Europe were killed here , by 1942 this camp started using Zyklon-B  to gas all the Jews. This camp would also normally kill children on the arrival. In one case a mother did not want to be separated from her 13 year old daughter so she bit and scraped an SS officer face both her and her daughter were shot by him on the spot as a form of punishment.

In 1942 at the wannsee meeting the Nazis came up with the final solution  . All the Jews would be taken to the east for labour they would then form large labour gangs separating the sexes. They would work on road construction and a lot of them would die due to natural causes and those who did not die would be dealt with accordingly. All the Jews would be taken to see a doctor who would decide if they were fit enough to work and those who were not fit enough were taken and Jewish prisoners would tell them they were going to be bathed and deloused after they undressed they were taken to the gas chambers which was made to look like a real bath house. The Jews would die with in three minutes of the gas been let in but the Nazis would leave them for about half an hour to make sure they were dead.

The Nazi did not only try and murder the Jews in Germany but many other counties such as Poland were they killed 2,600,00, the USSR they killed 750,000 Hungary they killed 700,000 and Germany were they gassed 180,000 these were not the only countries that Hitler invaded in was a few.

After world war one Germany had fallen in to a state of depression and every one was looking to blame some one so Hitler used the Jews as a scapegoat.

The Einsatzgruppe were a (special task force) they worked in Germany and occupied Europe. Members of the Einsatzgruppe came from the SS and the SD. The Einsatzgruppe often carried out the mass murder of Jews. They would go straight to the Jewish community  and whip them out like a mascara shooting was the most common form of murder but  in 1941 Heinrich Himmler asked for the shooting to be stopped and for a more convenient style of killing be developed. They were also in charge of the Final solution.

Over all Hitler tried many things to eliminate the Jews and not just the German Jews but Jewish people all over Europe. He killed 6million Jews with the help of the SS SD and the Einsatzgruppe. Once they came up with the final solution this allowed more Jewish people to be murdered this was genocide towards them not only that but the Jews were scapegoat for something that was not there fault.